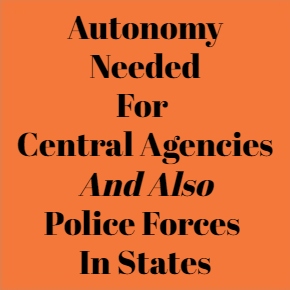 Both Central Agencies And State Police Are Misused

Both Central Agencies And State Police Are Misused

Mamata Banerjee was at her acerbic best during the press conference at Nabanna, the seat of administration of the West Bengal government, on Monday. She lambasted the Narendra Modi government and called it worse than the rule of Hitler, Mussolini and Stalin and said that it was "bulldozing the federal structure" and using Central investigation agencies to run a "Tughlaqi-style government". She demanded autonomy for Central agencies.

What Banerjee said is absolutely correct. The Centre is using agencies under it and draconian laws to harass political opponents and silence critics. No less than the Supreme Court was constrained to call the CBI "a caged parrot" and suggested autonomy for the agency. If investigative agencies follow the orders of their political masters, they are bound to act in a biased manner and the purpose of law is not served.

But the same goes for the police force and other investigative agencies under the states. States also use the police, CID and other state agencies to file cases against political opponents to harass them. For instance, Barrackpore MP Arjun Singh has rejoined the TMC a couple of days back. The Bengal government had filed more than 70 cases against him when he was in the BJP. Will these cases be taken to their logical end now? All of them will be dropped as he is now with the government.

Hence, not only autonomy for Central agencies, India needs a complete overhaul of the policing system to make it free from political interference, more professional and effective in fighting crime irrespective of the political colour of the criminal. Police reforms are long overdue but no political party is taking the initiative to raise this issue as none of them would like to lose control over the police when they are in power in states.