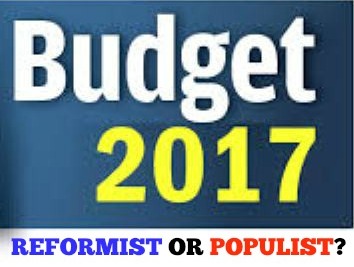 Budget 2017: Will Jaitley Put India First or Be Populist?

Budget 2017: Will Jaitley Put India First or Be Populist?

Editor-in-Chief of indiacommentary.com. Current Affairs analyst and political commentator. Writes for a number of publications. View all posts by this Author
With the budget to be presented on 1st February, a lot of expectations are floating in the market. Since it is the first budget post demonetization, people think that the finance minister will try to soften the blow dealt by poor implementation of the scheme. Further, since elections are being held for five state assemblies just days after the budget, people expect a lot of tax relief and sops to sway voters. But since the economy has slowed down after the cash crisis and the government needs huge funds for implementing all its welfare and infrastructure schemes, a lot of financial jugglery can be expected in this budget.

All kinds of figures are being thrown about for the income tax threshold limit. Some say it will be increased to Rs 300000 while others put out an unrealistic figure of Rs 500000. While it is necessary to increase the threshold limit given the fact that it was last increased in 2014-15, it also needs to be said that since 1.62 crore people file returns but pay no taxes, there should be a minimum tax that needs to be fixed for anyone earning above Rs 250000 but below the threshold if he or she files the return. Tax return acknowledgement is necessary for various reasons (loans, other financial investments, investments in property and the like) and processing the same entails costs for the government. So even if the threshold is increased, non-tax payers earning above Rs 250000 should be allowed to file their returns if it below the threshold only on payment of a MAT-like tax of, say, Rs 500 or 2 % of the amount exceeding Rs 250000, whichever is higher. This will either reduce the number of frivolous returns that clog the system, or boost revenues. The slabs should be readjusted to new threshold limit to Rs 10 lakh at 10 percent, Rs 10 lakh to Rs 25 lakh at 20 percent and thereafter 25 percent. There is also a case for reducing corporate tax by 5 percent. This will boost investment. Along with this, big data mining of post demonetization bank records should be used to bring evaders in the tax net.

The service tax is expected to be increased to anywhere between 16 to 18 percent. This is in line with the figure being bandied about for GST. As soon as the GST regime comes into force, service tax will be subsumed, so increasing the rates to lessen the shock is a good thing to do. The finance minister will do well to increase it to 16 percent now since it will automatically be raised to whatever is decided for GST in July or such later date the new tax regime comes into being.

The finance minister should also look into reducing the plethora of exemptions available to both individuals and companies. Along with a readjustment of the instruments into which savings needs to be channelized, it needs to be decided whether it is at all good to have tax induced savings. If threshold is increased and tax rates lowered, excessive exemptions take many out of the tax net and this should be avoided. Hence, exemptions need to be curbed.

Another idea being heard is to put money into Aadhar-backed accounts of the poor (something like helicopter money or minimum basic income). That would be the mother of all doles and is not advisable. It can lead to inflation if all of it is spent or it may not be spent at all (as former RBI chief Raghuram Rajan had argued), defeating the very purpose of providing it. Further, providing a very small amount to all is bad policy. It also makes for a lazy nation if people get money without doing any work or even without taking the trouble to apply for it. If dole is at all to be given in this way, it should be given in reasonable amounts only to the destitute.

This first post demonetization budget can be reformist and path breaking, or populist and pedestrian. It can be the former if the finance minister has the vision to provide direction to the economy struggling with cash crisis and worried about tax raids and inspector raj. It can pave the way for a resurgent India by introducing much awaited reforms. Or it can be pedestrian if it looks at people only as a vote bank and tries to appease them with sops. Milton Friedman, the economist who had propounded the theory of helicopter money, had also warned that there is no such thing as free lunch. The decisions the government will take today will come to haunt it later if it indulges in financial profligacy. Hence, the finance minister should generate resources before giving them away. Chances are that Jaitley will let populism dictate the drafting of the budget. That will be a real tragedy.