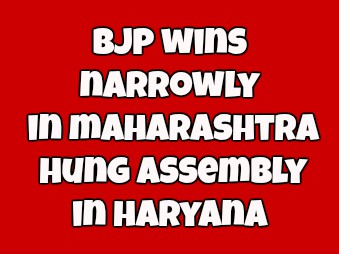 Bursting The BJP Balloon, And How!

Bursting The BJP Balloon, And How!

Our Special Correspondent had it as wrong as the exit polls. He had predicted a clean sweep by the BJP in Haryana and the BJP-Shiv Sena alliance in Maharashtra just a couple of days ago. But in the end, the BJP alliance won in Maharashtra with a hugely reduced margin and Haryana threw up a hung assembly. Obviously, the results surprised everyone including the ruling party, the Opposition, the psephologists and the political commentators. It also proved that most of the times it is impossible to predict the public mood until the votes are counted.

The Congress and the Jannayak Janta Party (JJP) almost dislodged the BJP in Haryana and the NCP and the Congress put up a spirited fight in Maharashtra despite the consolidation of the saffron votes. The BJP was not expecting this. It had counted on the groundswell of support for its moves in Kashmir to get it through its first test after the general election. But the results prove that in state elections, bread and butter issues are more important that hyped-up nationalism.

Both the Devendra Fadnavis government in Maharashtra and the Manohar Lal Khattar government in Haryana did not have a glowing record. In fact, they ran a pedestrian government and were hence facing huge anti-incumbency. Ideally, they would have been shown the door if the opposition had managed to run an effective campaign. But in the end, the overpowering organizational strength of the BJP and the Shiv Sena made them cross the finishing line in Maharashtra and the lack of the same in the Congress, coupled with the rise of the JJP, prevented the opposition from putting it across the BJP in Haryana.

The results clearly show that at least in the states the BJP, or any of its alliance with any party or parties, is not invincible. The BJP is not as big a juggernaut as it is made out to be by a section of the media. Nationally, it can ride on the huge brand equity of Narendra Modi but when it comes to state elections, it is just like any other party and the opposition must draw up a plan to call its bluff from now on. They have lost too many elections and must learn from them to counter the BJP and start winning.