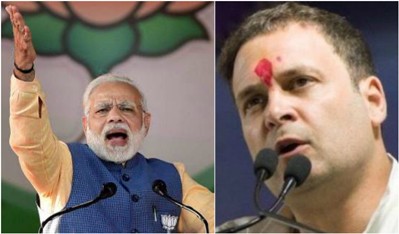 By Mocking Modi, Rahul & Co. Are Lowering Their Own Presitge

By Mocking Modi, Rahul & Co. Are Lowering Their Own Presitge

Editor-in-Chief of indiacommentary.com. Current Affairs analyst and political commentator. Writes for a number of publications. View all posts by this Author
The opposition leaders, Rahul Gandhi being the chief among them, have not learnt their lessons from the response their reactions to the Balakot strikes received from the people. This time too, they have taken to mock Prime Minister Modi for his address to the nation for announcing Mission Shakti. That India became only the fourth nation to achieve ASAT capability doesnt matter to them. Do they think that such a historic feat was to be announced in a press conference by the Under-Secretary of the Ministry of Defence? It would have demeaned the efforts of our scientist and would not have focused the worlds attention on the feat.

Rahul Gandhi was particularly comical. He wished the Prime Minister a very Happy World Theatre Day and later said "he made the country wait for 45 minutes for his announcement, did you look at his face? He has realised that the Congress will now give justice. Modi is now afraid that his time to go has come." One is still wondering whether Rahul Gandhi has acquired super powers. What did he see in the face of the Prime Minister that we ordinary mortals could not? Did fear show on Modis face? Or arrogance? He was making a historic announcement and his face was appropriately solemn. Rahul has started seeing things and interprets them according to his convoluted logic.

Akhilesh Yadav and some other leaders said that Modi was trying to divert attention from issues on the ground. Still other leaders questioned the timing of the announcement and wondered whether it violated the model code of conduct. If the test was successfully conducted today, should the Prime Minister have waited till May 23 to make the announcement? Did he, in his choice of words, try to appropriate the feat of the scientists as an achievement of his government? As for the code, officials of the Election Commission have already clarified that security related issues are not covered by it.

Actually, the opposition is confused. Since the NDA government has taken some bold decisions on the security issues and has given a free hand to the armed forces as well as put several defence related missions on fast track, the results are there for all to see. Since this is happening close to election time, the opposition thinks that the incumbent will reap rewards for the same. They do not know how to react. But they must realize that by mocking Modi, they are lowering their own prestige in the eyes of the people. If the attention of the people has been diverted from the real issues, the opposition is to be blamed. They have neither come together to form an alliance to stop division of votes nor have they launched a sustained campaign to highlight the shortcomings of the government. They have left an open field for Modi. It is no surprise he is scoring goals after goals.