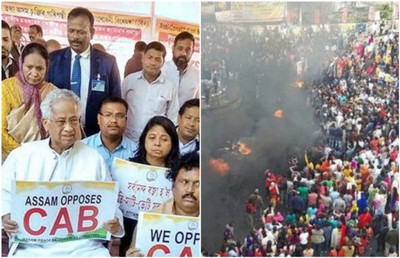 CAB: The Bill Of Contention

CAB: The Bill Of Contention

The BJP is a party driven by a Hindutva agenda. It has never really cared for the secular credentials of India. Being a political party, it has followed the Constitution in the letter, but the same cannot be said about following it in the spirit. It has mocked the liberals as they have mocked its disregard for history. The BJP had never really reconciled itself to the partition of India and more the fact that complete exchange of population along religious lines did not happen then and India was not turned into a Hindu rashtra. It had made the NRC and the Citizenship Bill frontline issues in its manifesto. If people had voted it to power for a second term after knowing its agenda, it has the right to pursue that agenda with seriousness and vigour. Anything lesser would be cheating the people.

In this regard, it will not do to cite two things which are being cited by many people. First, that manifestoes are not read by a majority of the people and hence should not be taken seriously. It may be so that all points in a manifesto are not read. But the party highlights the main issues in street corner meetings and leaders explain the same to the people in their speeches. Both Prime Minister Modi and Amit Shah had made the NRC and the Citizenship Bill major issues ahead of the 2019 general elections. If people still voted them to power, they have the right to pursue them. There is no doubt that the party wishes to consolidate the Hindu votes in order to perpetuate its winning streak and all its actions from now on will be in that direction.

That brings us to the second thing. Many people, TMC's Derek O'Brien in particular, lose no opportunity in pointing out that despite BJP's claim that an overwhelming majority in India supports its policies, it has come to power on the votes of just 40% of the people. That is an absurd thing to say in a democracy run by the first-past-the-post system. O' Brien, especially, comes from a party which, by his calculations only, represents just 0.2% of the total votes in India, is least qualified to accuse the BJP of not having the support of the people. If the BJP acquired the majority to run the government as per the electoral system in force, it goes without saying that it can claim the support of a majority of the people. O Brien's party claims the same in Bengal despite winning just 50% of the votes. That is and will remain, the only way politicians will claim support of the majority.

If the government thinks it needs to expedite grant of citizenship to non-Muslims like Hindus, Sikhs, Parsis and Christians from Pakistan, Afghanistan and Bangladesh (all Muslim majority nations where minorities are treated as second class citizens) who left their countries due to religious persecution, it has every right to make a law on the subject. It is unfair to accuse it of diluting the secular credentials of the Constitution. The earlier requirement for the grant of citizenship to such people was 11 years. The new Act will shorten the period to five years. If we need to protect the rights of minorities in our own nation, what is wrong in protecting the same of those from countries contagious to India and who enter India due to a porous border?

The main accusation against the government is that it is not allowing the Muslims from these countries to have the same right of acquiring Indian citizenship, thereby discriminating against them. But isn't the Citizenship Bill supposed to protect the rights of persecuted minorities in these neighbouring countries? How can Muslims in those countries claim religious persecution if they are following the religion of the majority? They can claim political or other persecution and apply for a residential permit or Indian citizenship but then there are other laws to deal with the subject. The present bill is only to protect the interests of the persecuted minorities in these countries. The other accusation is that people from Sri Lanka and Burma (Rohingya refugees) have been excluded. People must understand that one amendment need not address all issues. The government has now addressed the issue of persecuted minorities from Pakistan, Bangladesh and Afghanistan. If there is a need, and if representations are made, others can be taken up at a later date.

Of course, within India, there are areas where the influx of persecuted minorities has been huge. Assam, for example, has been battling with this influx and the resultant change in the demographic composition of the state for a long time. There was the famous agitation in the state that went on for a number of years before Rajiv Gandhi signed the Assam Accord with the All Assam Students Union (AASU) when it was decided that all those who illegally entered the state after the cut-off date in 1971 would be detected and deported. A mechanism was built-in in the Accord but, as is the wont of the Congress, it never took the initiative to implement the Accord despite being in power, both at the Centre and in the state, for many years after the Accord.

The Citizenship Bill brings the cut-off date forward to March 2014. It is but natural for Assam to erupt. With it, other north-eastern states that are predominantly the home of indigenous tribes and where people view 'outsiders' with suspicion (there are inner line permits in some of these states which have to acquired by people from other states to visit demarcated areas in those states and people from the rest of India cannot purchase property in these states) are also up in arms against the Citizenship Bill. While people in Assam are worried that if the cut-off date is brought forward from 1971 to 2014, the state will have to bear the additional burden of a huge number of people whose language, culture and habits are totally different from them and who threaten to reduce the original inhabitants of the state to a minority. People in other north-eastern states also express similar fears.

The government will need to assure these people how the changes being envisaged in the Citizenship Bill will not affect their states. It will have to explain to the people in Assam how it proposes to accommodate the 'extra' people and how it will protect the Assamese culture, language and habits from being hijacked by outsiders. The venerable English daily, The Assam Tribune, expressed these fears in an excellent editorial "CAB Must Go" where it said that "aimed clearly at rehabilitating the illegal Hindu migrants of Bangladesh living in India, particularly Assam, the Bill makes a complete mockery of the existential crisis being faced by the Assamese people who are on the verge of being rendered minorities in their homeland. Aside the rehabilitation of the existing Hindu migrants, the Bill is bound to open the floodgates for fresh streams of Hindu migrants into Assam. The ill-conceived Bill also rides roughshod over the Assam Accord of 1985."

These are genuine concerns that the government cannot overlook. Although Prime Minister Modi has been appealing to the people in Assam to have faith in him, the situation has gone out of hand in the state. It will not do to blame it on misinformation being spread by vested interests. The fear of being swamped by people that do not have any linguistic or cultural affinity with them has been gnawing at the psyche of the people in the north-east, especially Assam, for over 4 decades. The government will have to assuage their feelings and address their fears. It will also have to pass the constitutional test as the Bill is certain to be challenged in the Supreme Court as most political parties and rights activists have called it "unconstitutional".