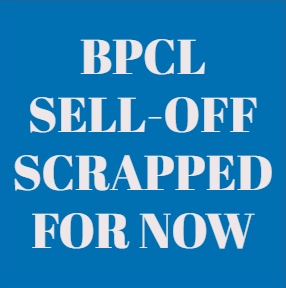 Finally, the government has scrapped the sale of its 53% holding in state-run oil refining and marketing firm Bharat Petroleum Corporation Limited (BPCL). The sell-off in BPCL was dogged by many factors ever since the government invited global EOI in 2020. The world was facing disruption due to the pandemic and although oil was hot property once restrictions were lifted and things slowly returned to normal, there were few takers even though the government was off-loading its entire stake. But when nothing of substance came up even after the government was forced to extend the deadline for EOI multiple times, it was decided to keep the divestment on the backburner. Now, it has been completely scrapped.

The prevailing geopolitical situation - with the war in Ukraine showing no signs of ending and all things pointing to the fact that the Russians are digging in their heels to remain in Ukraine for longer than it was earlier expected - has also made the government change its mind. The official position, as stated by DIPAM, was that "the multiple Covid-19 waves and geo-political conditions affected multiple industries globally, particularly the oil and gas industry. Owing to prevailing conditions in the global energy market, the majority of qualified interested parties (QIPs) have expressed their inability to continue in the current process of disinvestment of BPCL". Hence, the statement said, the present process was being called off and all EOIs from QIPs stood cancelled. It also said that decision on re-initiation of the process will be taken in due course based on review of the situation.

With this, the curtains have come down on the disinvestment process of what was once considered the centrepiece of the privatization drive of the government of India. The government was left with no alternative as the expression of interest was very low considering the asset on sale and even those who had qualified were no longer willing to participate further. In a way, what has happened is good as at this point of time, BPCL would not have fetched it true underlying value. Maybe later, when things are better globally, the government will get the best price for it.