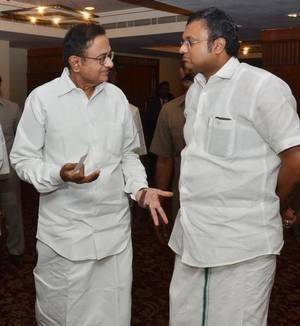 If there is one thing that most Indian politicians do not possess, it is shame. The way P Chidambaram, being taken to jail as someone alleged to have misused his official position to grant favours to his son's 'clients', tried to mock the government by saying "you know what is 5 percent? You remember 5 percent," and the way he righteously said that he was "worried about the economy" just shows that he is shameless. He very conveniently forgot that during his tenure as the finance minister, during 2012-13, the economy grew by just 4.8% in the last quarter and grew at just about 5% for the whole year.

Despite being the finance minister at that time, Chidambaram had not displayed any concern for the economy. He was not worried then. In fact, he displayed nonchalance, even arrogance, when questioned about the decline in growth at that time. Then why is he worried now? Having been in the finance ministry, can't he recognize that this is a cyclical slowdown? Or is his analysis clouded by political colours?

Whatever be the cause, despite accusing the government of making his arrest a spectacle for television audiences, Chidambaram is also guilty of playing to the gallery. His remarks were almost Kadar Khanesque. At other times, he is given to long lectures. But while being whisked away to jail, he forgot his scholarly credentials and entertained the journalists and the whole country with some drama, perhaps to show that he was not worried at being arrested.

P Chidambaram has a lot to answer. Under his charge, the finance ministry is alleged to have allowed massive inflow of foreign funds to INX Media. His son, Karti Chidambaram, is alleged to have brokered the deal. In the Aircel-Maxis case, he is alleged to have withheld FIPB clearance to the merger deal till his son got a 5% stake in Aircel. These are serious charges of misuse of office. The Chidambaram family reportedly owns various properties abroad the combined value of which is mindboggling. Chidambaram has to answer these and many other questions that will crop up when he is brought face to face with others who have been arrested in both cases. The case charge sheets will be filed (Karti has some questions regarding this which might be answered sooner than he thinks) and the money trail will also be reconstructed. It is not going to be easy for the father-son duo.