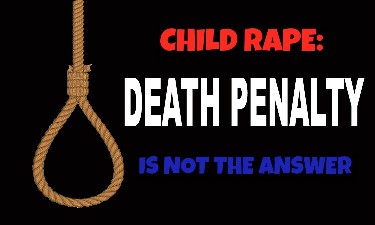 Child Rape: Death Penalty is Not the Answer

Child Rape: Death Penalty is Not the Answer

Editor-in-Chief of indiacommentary.com. Current Affairs analyst and political commentator. Writes for a number of publications. View all posts by this Author
The Centres decision to promulgate an ordinance prescribing the death penalty for rapists of children below 12 years is a decision meant to appease the public and is not based on sound legal policy. It is increasingly being recognized by legal experts and scholars that certainty, and not the severity, of the punishment acts as deterrent against crimes. But the government has made the punishment for raping a child equal to that of murder. It will act as an incentive for rapists to murder the victim and eliminate the risk of getting caught and punished.

The government should have instead acted to ensure certainty of apprehension and punishment by eliminating inefficiencies in investigation, plugging loopholes in existing laws and streamlining legal processes to ensure faster delivery of justice. There is an urgent need to sensitize people involved in these cases in any way. A standard and simplified investigation procedure must be laid down and the police officers must be told to be very careful in questioning the victim as children get confused after the trauma of sexual abuse. Doctors examining the victim must be told to follow specific procedures with a fine toothcomb and double-check everything as medical reports are the best loopholes used by defense lawyers to get their clients off the hook. Judges need to be told that cases must be decided fast and the victim must never be brought face to face with the accused as children get scared when confronted with the perpetrator. There must not be excessive questioning or cross examination of the child. On the other hand, it is a fact that most rapists of children are people known to them. Hence, parents need to be educated about tell tale signs of distress a child shows in the presence of particular relatives or friends. This could be done through schools by involving activists and psychologists.

If there is no certainty of punishment, crimes are not deterred. The death penalty exists in India for the rarest of the rare crimes. The Nirbhaya rape case was one such crime. Four accused in that case were ordered to be hanged till death and the sentence was finally upheld by the Supreme Court on May 5, 2017. Almost one year has passed but they are yet to be hanged. Where is the certainty of punishment? In absence of that, no deterrent  however draconian - is going to work.