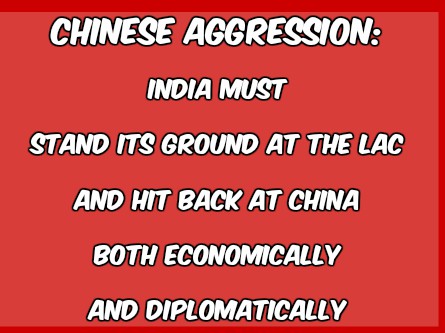 China Needs To Be Given A Fitting Reply

China Needs To Be Given A Fitting Reply

China is trying to up the ante at the Line of Actual Control (LAC). For, Chinese commanders and troops do not have the gumption or courage to either cross the LAC or engage the Indian army in scuffles if the orders from above are to maintain peace. Hence, it is clear that despite the 1993 agreement between the two countries to maintain the status quo at the LAC, Chinese troops first entered deep inside Indian territory and now, despite on-going negotiations to defuse the tension, have once again tried to push the Indian army the hard way by starting combat. China is, as usual, playing a double game. It is showing the world that it is a responsible nation by sitting across the table and holding talks with India at many levels. At the same time, its commanders and troops at the LAC are trying to intrude into Indian territory surreptitiously.

India fittingly did not allow that to happen. By all accounts, the scuffle was the result of the Indian troops not allowing the Chinese to make further headway inside Indian territory. It has been reported that the Chinese troops at the LAC are armed with nail-studded rods. Those are weapons of street-fighters and not army men guarding the borders of any nation at icy heights. This proves that they were ready for hand-to-hand combat and wanted to inflict maximum damage on the Indians. This also proves that the Chinese side is holding the negotiations just for show; its actual intention is to keep pushing inside Indian territory. The Indian army will have to rethink its strategy after the new offensive by the Chinese.

The government, too, will have to take steps to force China to give up its aggressiveness. The Chinese government wants to bring India to heel diplomatically and economically by applying pressure at the LAC. It is aggrieved that India has supported other nations as they move to question China about the spread of the coronavirus. It is angry that India has banned Chinese firms from investing in the country. It is scared that foreign firms will stop manufacturing in China and move to India post-Covid-19. It is concerned that it will increasingly lose its hold on the huge market in India.

India must not budge from its positions at the LAC and must hit back at China both economically and diplomatically. It must look for alternative sources of supply for critical products that are now being sourced from China. Imports of non-essential items from China must be banned. Chinese firms must not be allowed to bid for the 5G. Diplomatically, India should make a common cause with countries like the US, Japan and Australia that are opposed to China. It must denounce the takeover of Hong Kong and engage more with Taiwan. It must aggressively do all that China is trying to prevent it from doing by applying pressure at the LAC. The Chinese will rub it in further if India shows any sign of weakness.