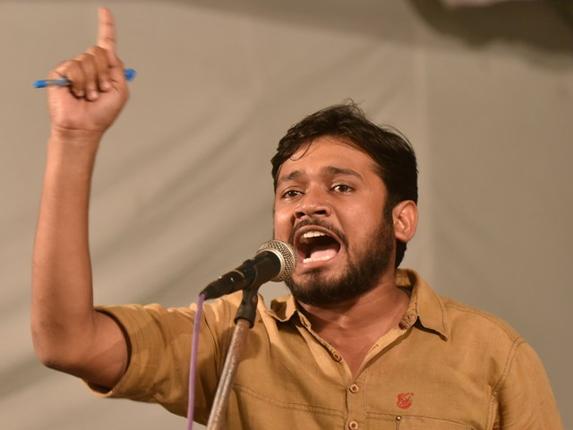 Editor-in-Chief of indiacommentary.com. Current Affairs analyst and political commentator. Writes for a number of publications. View all posts by this Author
Kanhaiya Kumar is a johnie come lately
For someone whose growing up years ran parallel to the Left Front rule in West Bengal, I find the brouhaha surrounding Kanhaiya Kumar almost comic. Maybe for the national audience and a partisan media, Kanhaiya is a fiery and impressive orator and he has many things to say which they have not heard being said in a way as dramatic as he said them before a swooning audience (and they were bound to swoon, for they had elected him their president). But I have seen men and women rail the system in more colourful speech and infinitely more dramatic body language in Bengal. What Kanhaiya spoke about was not a patch on what young men and women used to tell the audience in the early years of the Left front rule in the state. The only difference was that they spoke about the class war while Kanhaiya Kumar chose to weave a freedom of speech angle against the backdrop of an anti-national slogan shouting bout in a university where he was the president of the studentâs union. In choosing to defend the indefensible, Kanhaiya raised a slogan (azaadi not from India, but azaadi in India) that sounded impressive but it is the very azaadi in India that he and his comrades seek to misuse. Kanhaiya Kumar is by no stretch of imagination the prototype of a common Indian youth. The average young person in India is very focused towards his education and career. Kanhaiya Kumar and his few fellow travelers are exceptions, born out of a heady cocktail of Leftist ideology and campus permissiveness in an azaad India. Still he says he is not azaad.

Socialist azaadi has looted the country
What has the socialist azaadi adopted by assorted politicians given the country? From the Left to the socialists, of which Indira Gandhi (garibi hatao) was one of the more famous proponents, have brought the country to ruin by adopting policies that have been largely discarded even in the countries where they were first experimented. The Left exhorts the working class to unite, for they have nothing to lose but their chains. In the process, the Left has chained the country to mediocrity and a lazy workforce. It has brainwashed some youngsters to just indulge in polemics. For 30 years, it kept on telling the workers in Bengal to demand this and that and strike work at the smallest pretext. Red flags and closed factories turned Bengal into a junkyard. Despite excellent infrastructure and talented and capable workforce, the state kept on slipping while newbie states jumped ahead. Hence, it did not work out when Buddhadeb Bhattacharya, realizing the folly, asked them to âjust do it.â The workers had realized they had been fooled when they saw pot-bellied comrades, with their foreign educated children, live a life of luxury while their lot had not improved. The Left has a vested interest in keeping the poor deprived and hungry, for otherwise there would be no class war. They want the poor to stand in queues to get their rations at subsidized rates. They do not want them to earn decently, chuck the queues and buy from stores like average Indians. They do not want them to come up in life. They do not want enough jobs to be created. They just want the poor to live on doles.

Left thinkers fear no role for themselves in years to come
The country has been running this circus for more than six decades. Grandiose schemes are announced for the poor. Crores are allotted. Middlemen working as a front for politicians corner all the benefits and the poor remain where they were. Party funds keep bloating in the absence of a transparent and workable political donation law. There can be no other explanation for the fact that despite spending trillions over 60 years, there is still gross poverty in several states in India. If ever an audit was conducted on how the welfare schemes panned out, one would find out that not even 5 percent of the money reached the poor. This was the azaadi the socialists got. They used this azaadi to loot the country. The worst part is that they shamelessly stole from the poor all these years. Leftist economists and thinkers have entrenched themselves in most think-tanks with cushy jobs and dish out utopian schemes that they think will better the lot of the poor. They look down upon private enterprise and whenever they do recognize their need, want them to be taxed at such rates as to make them unviable. They want the government to undertake business despite gross mismanagement of such PSUâs and rampant corruption in them. They wish to continue transfer of subsidies to the poor in the current manner, ignoring the massive leakages and fattening bellies of middlemen, with kickbacks going up to the highest levels. They want the country to continue to make policies that help in this plunder of its resources. They fear that if some of the policies of this government work, they will be out of business, as their fellow thinkers have been in the erstwhile USSR and China. Hence they have upped the ante.

Kanhaiya Kumar is a pawn
But Kanhaiya Kumar will not understand all this as he has been oriented to believe that others have usurped what rightfully belongs to him and others like him. He believes he should get it back, not by educating himself, making himself capable and working for it but by waging a class war. He is a pawn and is being used by bigger players who have lost the capacity to face the people. For more than six decades, the poor of India have been taken for a ride by socialist politicians who drink the best scotch and whose children first attend the best universities in capitalist countries and then work there to earn in dollars. These politicians needed a son of the soil to take the cause forward. The NDA government provided them one by foolishly arresting Kanahiya on sedition charges. Later, sympathizers of the âcauseâ created a halo around him by beating up students, faculty and mediapersons and even Kanhaiya himself at Patiala House court. Irresponsible BJP leaders are offering rewards for cutting off his tongue and posters have even come up offering a reward for killing him. This has made him a cult figure for the Left and they will now use him for their electoral benefit. It is rumoured that he will campaign for the Left in the ensuing assembly elections in Bengal. But Kanhaiya is a fresher in this game. Just let him criticize the actions of even one of the political cheerleaders he has surrounded himself with and see how they take him off the pedestal. Kanhaiya Kumar should realize that the azaadi he talks about is there in India for most of the people. If Kanhaiya finds that it is not there, then he should be complaining against the very cause he is espousing. For, it is the socialists who have ruled India for the last six decades. Hasnât the suit-boot ki sarkaar come just two years ago? It is only people whose head has been filled with imaginary demons by failed politicians who fail to see the kind of azaadi they get in India.