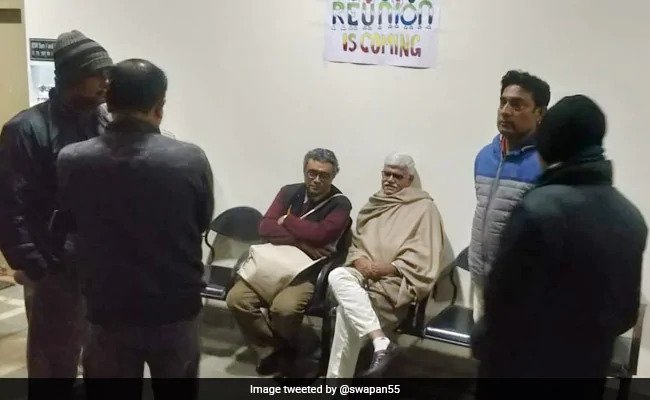 Confining Swapan Dasgupta: Left and Right Are Two Faces Of The Same Coin

Confining Swapan Dasgupta: Left and Right Are Two Faces Of The Same Coin

There is actually no difference between the Left and the Right in India when it comes to keeping their own views supreme and not allowing others with a different view to even have their say. The way BJP MP and noted columnist Swapan Dasgupta was gheraoed at Viswa Bharti University in Shantiniketan by Left-leaning students who refused to allow him to complete his address on the Citizenship (Amendment) Act confirms this fact.

Dasgupta was to address the gathering at the main campus of the university. But when the students announced their intention of disrupting it, the authorities shifted the venue to another campus. But the MP was stopped mid-way and confined in a room for over four hours. If the Left accuses the BJP of stifling free speech, not allowing debate and discussion on issues and showing an authoritarian streak, this attempt to silence Dasgupta showed that it follows double standards. The Left is equally guilty of suppressing freedom of speech.

Free speech is the cornerstone of democracy. Any democracy becomes vibrant only when a thousand ideas bloom. The Left and the Right can have their own take on issues but they have no business preventing others from airing their views. What happened at Shantiniketan showed that by not allowing Dasgupta to speak, the Left-leaning students prevented people from understanding the reasons behind the CAA and why the BJP government thought it fit to enact the law.

It is not for the Left (or anyone else for that matter) to impose their views on the people. Citizens must be allowed to listen to or read wide-ranging opinions on subjects of national importance and then form their own view. By behaving in a similar manner in stifling free speech, the Left and the Right have both shown that they are two faces of the same coin.