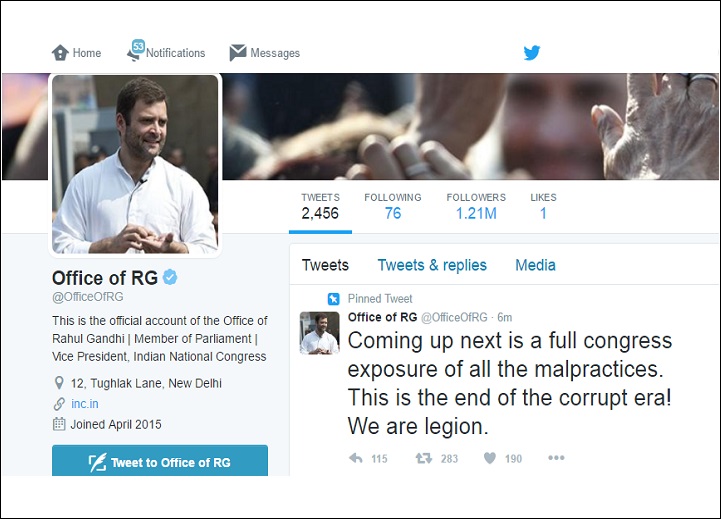 Editor-in-Chief of indiacommentary.com. Current Affairs analyst and political commentator. Writes for a number of publications. View all posts by this Author
As soon as the Twitter accounts of Rahul Gandhi and the Congress party were hacked, party spokesmen have started badmouthing PM Modis Digital India push and the move towards digital payments and a less-cash society. Their contention is that if Twitter accounts are not safe, digital India and digital payments will create chaos. This is along expected lines. Congress, of late, has become a party given to regressive thinking. Their one point agenda is to oppose anything that this government proposes. Of course the duty of the opposition is to educate the people about the faults in the policies of the ruling party, but only when it is against the public good.

In this case, the Congress' opposition to digital India and digital payments is largely based on the feudal thinking that has served the party so well for so long. It has allowed the party, its leaders  both big and small  and those in their good books to amass huge wealth at the cost of the nation. Corruption and crony capitalism attained newer heights under UPA I & II, with multi-billion rupees scams. These scams were only possible because rules could be bent at will in a system that was opaque and mired in red tape. With PM Modi now bringing transparency in all government departments by making most registration, renewal and purchase transactions online, the need for corrupt and well connected middlemen  the kind spawned by the Congress in every department  will vanish. Transparency will be the buzz word and Congress has never been comfortable with that.

But the party is outdated in its thinking and has lost all connection with the people at the grassroots. It is not able to gauge the mood of the people in the country at this juncture. Perhaps buoyed by its moderate success in Bihar, the party thinks opposing just for the sake of opposition is going to work. But, as the recent civic elections in Maharashtra and Gujarat showed, the people are not buying its arguments. People are fed up with rampant corruption, lack of transparency in dealings of the government, crony capitalists and local politicians who get richer by the day. Despite huge inconveniences, a majority of the people are supporting demonetization. The Congress has lost touch with ground reality and it is not helping its cause by continuing to oppose measures aimed at ending corruption and ill-gotten wealth.

Also, the party spokesmen are so technologically deficient that they do not understand that the government has nothing to do if Twitter accounts are hacked. Any reasonably intelligent hacker can do so if he or she has the expertise, the desire and the patience  if the keepers of the account he or she wishes to hack are not aware enough to keep their accounts safe by using extremely secure passwords which are changed at reasonable intervals and are not disclosed to unauthorized persons. There can be many reasons why and how Rahul Gandhis and Congress accounts were hacked. But the government cannot be blamed for any of them.