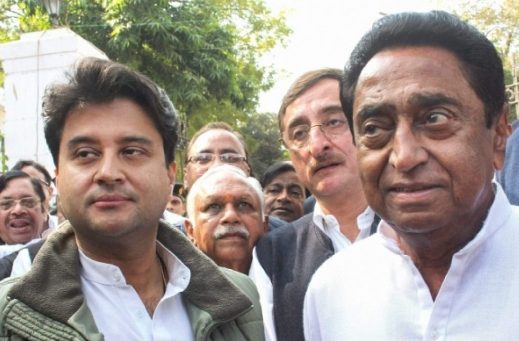 A full-scale war is erupting in the Congress party in Madhya Pradesh as Jyotiraditya Scindia is bent on making things difficult for the chief minister Kamal Nath (who many felt got the top job despite Scindia being the frontrunner) over the farm loan waiver promise that the Congress had made in its election manifesto. A couple of days ago, Scindia promised to hit the streets and launch an agitation to force the government to waive the loans. But Nath was not cowed down. He challenged Scindia to launch the agitation. This was enough to set alarm bells ringing in the party high command and it has prodded both to meet and sort out their differences. Sonia Gandhi is likely to intervene if things don't work out between the two.

Dissidence has always been a feature of the politics in the Congress party in the states. Sometimes it was engineered by the high command to clip the wings of high flying chief ministers and at other times power coteries in states instigated it to promote their own candidate. But many times it was a tug of war between two powerful local satraps like it is now in Madhya Pradesh.  Scindia, in true Congress tradition, was looking for an opportunity to get back at Kamal Nath. He found it when he saw that the farmers were agitating for the promised loan waiver.

Although the Kamal Nath government had started waiving farm loans just days after it was sworn in, the scheme was neither properly notified nor efficiently implemented, leading to dissatisfaction amongst the farmers and loss of goodwill for the government. Since matters were not rectified for many months, the farmers started agitating. Scindia picked up the thread and without discussing the matter with Nath, tried to gain political mileage out of the situation.

Like most other state governments, the Kamal Nath government in Madhya Pradesh is also stressed for funds and is finding it difficult to provide them for most of its schemes. Kamal Nath has said that the government was elected for 5 years and it will keep all its promises within that period. But the manifesto had promised farm loan waiver in 10 days. Nath can well say that the process has been started and implementation takes time, but Scindia is not going to back off unless the high command intervenes and brokers a truce between the two.