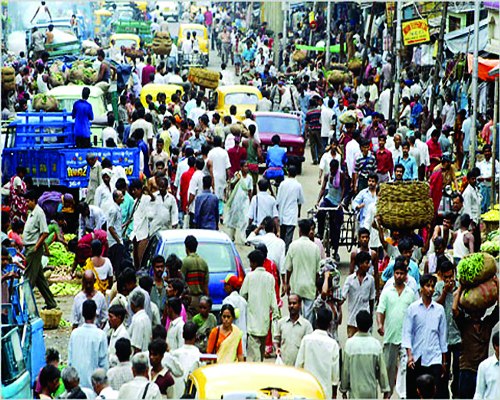 It was very good on part of Prime Minister Modi to highlight the perils of population explosion in his Independence Day address to the nation. He was the first Prime Minister in decades to talk about the fact that the Indian population is still expanding at a much faster rate than is desirable. This was something most governments had forgotten after the 'hum do hamare do' movement, although Sanjay Gandhi had gained notoriety with his forced sterilization scheme to control population during the dreaded Emergency.

India's land mass is too small to support its population. India has just 3.287 million square kilometers of land mass and its population stands at 1.370 billion people. China has more people at 1.420 billion but its land mass at 9.597 million square kilometers is almost three times that of India. The US, on the other hand, has a population of just 327 million people who live on 9.834 million square kilometers. This makes India the most overcrowded place on earth. This leads to too many complications with unremunerative agricultural land holdings, crowded towns and cities, squalor, too many people to feed and growth that always looks miniscule when compared to the number of mouth to feed. It also puts groaning pressure on all public utilities and the health and education system.

People who do not plan their families are often unable to bring up their children in the desired manner as they have limited resources. With the cost of bringing up a child going up substantially and increasing by leaps and bounds every year, it is impossible for middle class families to provide the best of health care, food and nourishment and education to more than one or two children. Modi was spot on when he said that "if the population is not educated, not healthy then neither the home nor the country can be happy". He also said that "in our society, there is a section which is very well aware of the consequences of uncontrolled population growth. They deserve our accolades and respect." He added that "not only do they contribute to the welfare of their family but also to the good of the nation. People who have played this huge role need to be honoured, and by setting them as examples we need to inspire the segment of society still not thinking on these lines." The Prime Minister promised schemes from both the Centre and the states to control population and incentivize those with small families.

But there is a genuine concern which needs to be addressed before drawing up schemes to control the population. Why should states that perform exceedingly well on controlling population growth suffer in the delimitation exercise? Rewarding states who do little to control population (read UP and Bihar) with greater political power by adding Lok Sabha seats in their tally during delimitation is something that is at odds with any population control policy. It penalizes states that have population growth below the national average and much below that of UP and Bihar. For any population control scheme to succeed hereafter, the concerns of these well-performing states need to be addressed otherwise the fear of reduction of political power through reduced representation in the Lok Sabha will make them contribute half-heartedly to the initiative.