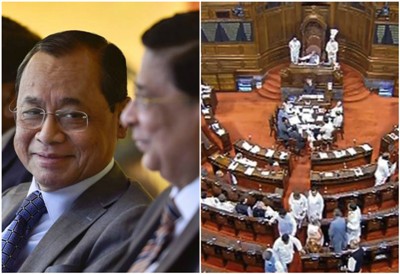 Retired CJI Ranjan Gogoi's nomination to the Rajya Sabha (RS) smacks of quid pro quo at first glance. But several questions arise in this regard. Is it necessary for the parties involved in quid pro quo to have an agreement beforehand? Something like you do this for me now and I will do that for you, either immediately or in future. If that be the case, then obviously Justice Gogoi is guilty of malfeasance for it can be assumed that he was party to several judgments that went in favor of the government and he is being paid back, as agreed beforehand, with the Rajya Sabha nomination. But the matter is not that easy to decide. The question is, did Justice Gogoi deliver the judgment singly and on his own? The answer is obviously no, as, in all such judgments, he was just a part of a bench of judges.

For example, in the Ayodhya verdict, Justices S A Bobde, D Y Chandrachud, S Abdul Nazeer and Ashok Bhusan were on the bench with him. In the Rafale verdict, Justices S M Kaul and K M Joseph were also on the bench. Both the verdicts were unanimous. So were all judges involved in the quid pro quo and will all be suitably rewarded once their term at the bench ends? If one were to believe that then there is no need to have a judiciary and the government might decide all cases on its own. And if one doesn't believe that then one has to believe that there is no quid pro quo in Justice Gogoi's nomination to the RS for the simple reason that it was not entirely in his hand alone to deliver judgments favouring the government. The other judges could have delivered an entirely different judgment and the most Justice Gogoi could have done in that case was to write a dissenting judgment of his own. But there was no way he could have written a single, unanimous judgment on behalf of all the judges if they were not convinced of the legality and soundness of the verdict.

At most, one can say that accepting the nomination so quickly after retirement (Justice Gogoi retired in November 2019) was improper on his part. Though there is no law that prevents it, Justice Gogoi should have anticipated the controversy it would raise and should have had a self-imposed cooling-off period before accepting any such offer from the government. Most people would not go deeply into the issue and consider the questions put forward above but would immediately allege quid pro quo, as is being done in a section of the media and by some retired judges of the Supreme Court. But it is entirely possible that the government wanted to nominate a legal luminary to the RS and who better than the recently retired CJI. Justice Gogoi has said that he would give details of why he accepted the nomination after taking oath as a member of the RS. It is proper that his reasons are heard forming an opinion.