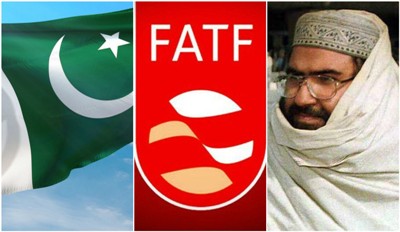 Courtesy The US, Pakistan Once Again Escapes From Being Placed On The FATF Blacklist

Courtesy The US, Pakistan Once Again Escapes From Being Placed On The FATF Blacklist

If Pakistan has once again escaped from being placed on the FATF blacklist, it needs to thank the developments in Afghanistan and the resultant US sympathy towards it. Otherwise, there was no logic in the regulatory body not taking stern action against Pakistan for two big reasons. The first was that it had allegedly complied with only 14 out of the 24 conditions that the FATF had asked it to work on in the last review. That, by itself, would have been reason enough to blacklist it. But the shocker came when Pakistan disclosed that it was unable to "trace" the dreaded terrorist Masood Azhar. How could someone like Azhar go missing when, as per FATF strictures, Pakistan was to keep all terrorists on its soil under close and round the clock surveillance? Both the above developments proved that Pakistan was taking 'action' in the most cavalier manner and this is something the FATF should not have condoned. Also, Pakistan was placed in the 'grey' list in June 2018. Giving any country two years to mend its ways is, after repeated extensions, in effect, diluting the strictness for which FATF stands.

But, apart from Pakistan's known sympathizers in the body - China, Malaysia and Turkey - the Western nations too, led by the US, do not want to upset the applecart now. The US is in the advanced stage of affecting a pullout from Afghanistan (in order to end its misadventure there and concede to the overwhelming public opinion in its country) and it knows that it will need Pakistan to keep an eye on the Taliban, who are most likely to occupy and rule stretches of war-ravaged Afghanistan once the US troops withdraw. The situation has become trickier after the results of the five-month-old elections in Afghanistan have been mired in controversy. If Pakistan is placed in the FATF blacklist, the US will not be able to provide it funds for the Afghanistan operations that the country might be asked to undertake on behalf of the US. Hence, US officials had made it clear to the FATF that Pakistan was making efforts to fall in line over terror funding and should be allowed more time after being warned. That is exactly what happened.

But the US and the FATF are both making a huge mistake in letting Pakistan get away with this. The country has allowed Masood Azhar to go underground and has only taken half-hearted measures to block the flow of funds to terror groups operating in its country. It is also widely known that Pakistan misuses the funds received from Western nations to fight terrorism in Afghanistan and at least a part of these huge funds are diverted to train and arm terrorists who target India. Yet, to serve their narrow geopolitical ends, these nations choose to ignore this. India must highlight this fact on a regular basis and not let the periodic reviews by the FATF become a farce (the February 2020 deadline for Pakistan has now been extended to June 2020). The current interaction between Prime Minister Modi and the visiting US President Donald Trump is a good opportunity for India to present its case.