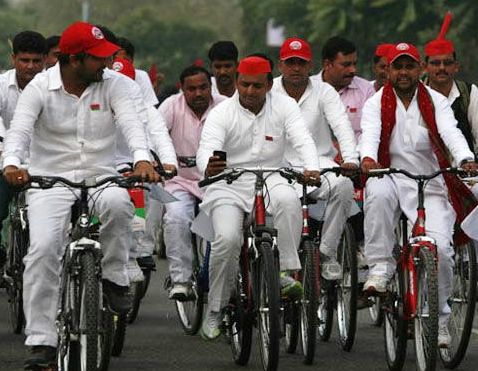 Cycle Does Not Guarantee Success for Akhilesh

Cycle Does Not Guarantee Success for Akhilesh

Editor-in-Chief of indiacommentary.com. Current Affairs analyst and political commentator. Writes for a number of publications. View all posts by this Author
The Election Commission (EC) has given a big jolt to Mulayam Singh Yadav in his twilight years. The veteran of many battles seems to have lost the war to control the Samajwadi Party to his son Akhilesh. With the EC recognizing the support Akhilesh has within the party and declaring him the president of the party as well as awarding the cycle symbol to his faction, curtains have come down on one of the most bitterly fought family feuds (unless Mulayam takes the EC decision to the courts, as he has indicated he will) that engulfed a hitherto respected party in UP. With the sordid drama that played out in public, Samajwadi Party has lost a lot of respectability.

Mulayam has started making incoherent statements that reflect his state of mind. He has said that it is because of Akhilesh that the Muslims have started being suspicious of the party. It needs to be remembered that miffed with the ongoing family feud, the Imam of Jama Maszid in Delhi had said that the party had betrayed Muslims and had called upon the community to teach a lesson to the party by not voting for it in the ensuing elections. Seeing his assiduously cultivated Muslim vote bank disappear, Mulayam is now holding Akhilesh responsible for the disenchantment. Mulayam has also indicated that he might fight the elections against Akhilesh.

What Mulayam and Akhilesh both fail to realize is that the common man is disenchanted because he feels that it is not the party or the leader who is serving them. They have started feeling as if they have become pawns in the hands of a powerful family that is ruining the state as they fight among themselves. People have begun to say that if they voted for Mulayam and Akhilesh, how are Mulayams second wife, her son and daughter-in-law coming into the picture?

Mulayam Singh Yadav has allowed a part of his family to make him forget raj dharma. His second wife and his family line through her had interests in real estate and other properties of Mulayam Singhs vast estate. Their sudden interest in politics is seen as an effort by Shivpal Yadav and Amar Singh to clip the wings of Akhilesh. By listening to this coterie, Mulayam Singh Yadav has grossly miscalculated and lost his hold on the party he created.

As for Akhilesh, despite getting the cycle symbol and sealing an alliance with the Congress, the task before him is onerous. He has to fight anti-incumbency along with a split vote bank. On top of that, the Muslims are not expected to support the party this time. A resurgent BSP is likely to snare away a lot of backward class voters. Akhilesh might have to cycle into the opposition after the election. This family feud has helped no one in the Yadav clan. It is the opposition parties who will be the gainers.