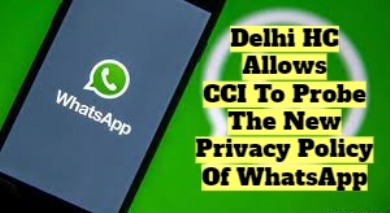 When any company is in a dominant position in its field and has a huge user base, like WhatsApp, it can start treating that user base as captive slaves. This is exactly what is happening now with WhatsApp. The app issued a new privacy policy in 2021. The policy lays out the terms which say that the data of all WhatsApp users will be shared across all companies or platforms of the Meta group, like Facebook and Instagram. There is no opt-out option available to users of WhatsApp - as the Delhi High Court has pointed out - which has made the Competition Corporation of India (CCI) to step in. The WhatsApp policy not allowing users to opt-out of data sharing is a restrictive trade practice which the company is trying to enforce on its users taking advantage of it dominant position in the cross platform instant messaging, audio and video calling, document and video sharing application field.

While it is true that the services of the users who do not accept its new policy will not be terminated and they will just face restrictions like not being able to receive incoming calls or notification after a few weeks. Their calls and messages will still remain end-to-end encrypted. But the Delhi HC objected to the fact that the company was not giving a choice to the captive users to exercise their right to deny sharing their data with other group companies. It said that WhatsApp is adopting a 'take-it-or-leave-it' attitude which makes its new policy open to CCI scrutiny as it is restrictive trade policy. It dismissed the appeal by the company to stop the CCI probe.

With India still not having a comprehensive data law, it is upon courts and other institutions like CCI to prevent companies from using their dominant position in their respective field to share customer data without their express consent. It is also upon them to prevent companies from obtaining this consent by leaving the user with no other option like WhatsApp is doing. Also, the government must not delay in enacting a comprehensive law on data storage and sharing to ensure that the data collected by companies is not misused.