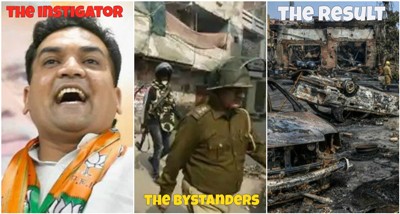 Delhi Riots: Mindless Violence That Could Have Never Happened If Signals Were Heeded

Delhi Riots: Mindless Violence That Could Have Never Happened If Signals Were Heeded

If one analyses the way the Delhi riots panned out over three days and how they were controlled when the powers-that-be stirred into action, it definitely seems that there was an idea to let the two sides give vent to pent up emotions that started building up ever since the police entered the Jamia Millia library and beat up students, the mob entered the JNU and beat up hostel residents and inflammatory speeches were made during the Delhi elections to polarize the electorate.

In the build-up to the situation, not a single person, entity or organization came forward to diffuse the tensions. But the Delhi Police deserve the worst censure. Supposedly the most modern police force in India and pampered accordingly, it stands accused of being overactive when the situation did not demand and remaining a bystander when its intervention was most needed. It is also guilty of not acting on Intel inputs (reports say that it was warned no less than 6 times) that warned of imminent clashes in the capital. It needs to be condemned for not heeding to distress calls, even from Akali Dal MP Naresh Gujral, and often taking sides when facing rioters.

The Aam Aadmi Party and Arvind Kejriwal won a handsome mandate from the people just a month ago. They won the second term with over 50% of Delhiites voting for them. An analysis clearly showed that Muslims had deserted the Congress and voted for the AAP. Yet, when it was required that the newly elected legislators of the party remain on the ground and be with their constituents, they were nowhere to be seen. The AAP had the confidence of the people of Delhi. If its legislators had been on the ground with their party workers, they could have prevented many of the clashes. But party councilor Tahir Hussain has been booked by the police for having a hand in the murder of IB staffer Ankit Verma and for instigating violence in his area. AAP stands accused of abdicating its duty towards its constituents.

The Congress, although a spent force politically with an insignificant presence in Delhi, spent most of the time accusing AAP, the BJP and the Delhi police through tweets and press statements. None of its leaders went to the affected areas or try to hold peace meetings. It was characteristic of a party that is down and out and has yet to figure out how to how to bounce back. There was an opportunity for the party to be proactive and show both the AAP and the BJP in a bad light and win huge brownie points. It could have helped in the party winning over many voters. Yet, its leaders chose the easy way out by just commenting from their plush pads and not being with the people when they were needed. Their inaction proved the fact that the party is sadly out of touch with present realities.

Of the BJP, the least said the better. Delhi Police could have acted on the first day itself, in a professional and non-partisan manner, if the political masters had ordered it to do so. But the Centre, which looks after Delhi's law and order and controls the police, let things drift. The party stands accused of allowing the likes of Kapil Mishra to do the damage through his incendiary speeches in Jafrabad. The BJP was the only party that had its cadre on the streets in full strength but for the wrong reasons. Who is Kapil Mishra to order the police to clear the roads by removing the anti-CAA protestors? The matter is being heard by the Supreme Court (admittedly for the Shaheen Bagh protests and the roads there but the order will have jurisdiction over all protests and blocking of roads all over India) and its order should be awaited.

But Mishra wanted a confrontation from day one. By extension, and considering the fact that the party top brass did nothing to muzzle him, the BJP also wanted the same. The BJP was amazed at how the protests had remained peaceful despite extreme provocation from its side. It could not figure out why the alleged anti-nationals and terrorists among the Muslims were not coming out of the woodwork to take over the protests and why it was being left to the women. In the end, they managed to start the fight. But at what cost? More than 40 people are reportedly dead and more than 200 injured. The cost of damaged public and private property is yet to be ascertained. But the damage to the social and communal fabric of Delhi is immense and irreparable. The home ministry needs to be commended for moving in quickly on Tuesday and bringing things under control in a jiffy. The question is what prevented it from doing so on Sunday night itself, or even on Monday?