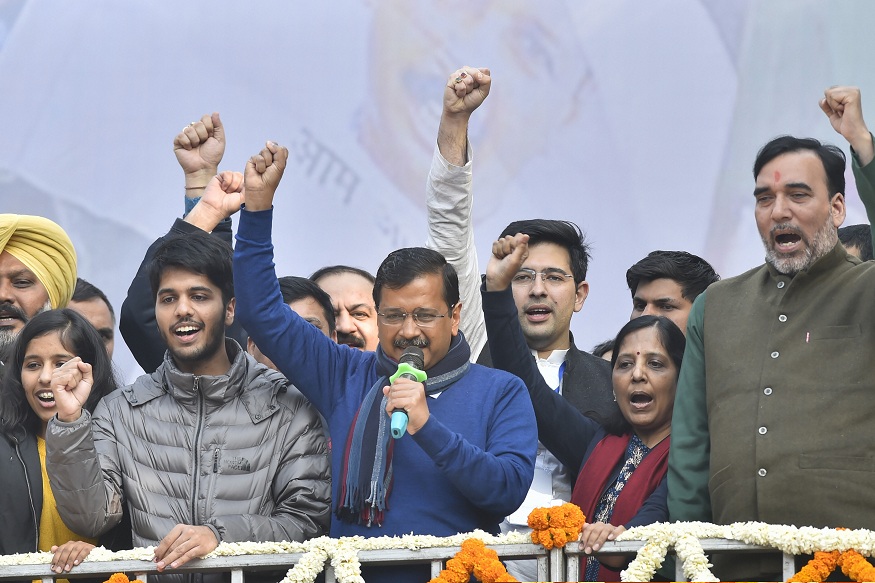 Delhi: Kejriwal Shows How The BJP Cannot Fool All The People All The Time

Delhi: Kejriwal Shows How The BJP Cannot Fool All The People All The Time

The people of Delhi have rewarded Arvind Kejriwal with another term in the most decisive manner for the good work his government did for them. In doing so, they have also rejected the nationalist hyperbole and vitriolic campaign of the BJP that sought to divide communities. The loss of just five seats for AAP from 2015 can be attributed to a gain in the vote share of the BJP (at the expense of the Congress) but the good thing for the party is that its vote share has remained intact. It won 54.3% of the votes in 2015 and this time it was marginally less at 53.57%. The AAP has committed voters and even if it lost some votes, it was more than compensated by Muslim votes this time. The community deserted the Congress to vote for the AAP, despite Kejriwal's ambivalent stand on the Shaheen Bagh protests. The rest of the votes Congress lost were scooped up by the BJP. The grand old party of India has become totally irrelevant in Delhi. Development worked for AAP while people were put off by the brutality perpetrated on students (by both the police at the Jamia and then the AVBP goons at JNU) and the complete focus on CAA-NRC by the BJP.

The Delhi elections have once again proved three things in the most emphatic manner. The first is that the Narendra Modi magic works only in general elections, it does not work in state elections. The BJP has lost in state after state despite Modi campaigning extensively. Then, arousing nationalist fervor and ignoring bread and butter issues also does not work in assembly elections. The BJP has been doing this, first to fight anti-incumbency in Rajasthan, Madhya Pradesh, and Chhattisgarh and now to counter Kejriwal's good governance in Delhi. But it has not succeeded. Finally, the BJP ploy of not pitting anyone against the charismatic Kejriwal did not pay dividends. The party had tried the same trick in other states too without success. It thinks people will vote for the Modi name and then he can put anyone in the chief minister's chair. But it has been proved now that local elections do not work that way. People want to know who will govern them and the BJP keeps making the same mistake in most states.

But the BJP, it seems, has refused to see the loss as a rejection of its policy of arousing nationalist and communal passions and indulging in divisive campaigning. Buoyed by the surge in its vote percentage from 32.3% in 2015 to 38.51% now, the party thinks that it is on the right track and has indicated that it will continue in the same vein for upcoming elections, mainly in Bihar. This is unsound political reasoning as the party should realize that the gains in Delhi were largely due to the complete rejection of the Congress by the voters and its votes split between AAP and BJP. People of India have been consistently voting differently for the general and state elections. In general elections, Narendra Modi's charisma and nationalist fervor (including Pakistan-bashing) gets the votes. But when it comes to state elections, development and bread and butter issues, along with who is going to be the chief minister are more important for voters. If the BJP refuses to recognize this, it is going to keep suffering reverses in state elections despite Narendra Modi and its much well-oiled organizational strength.