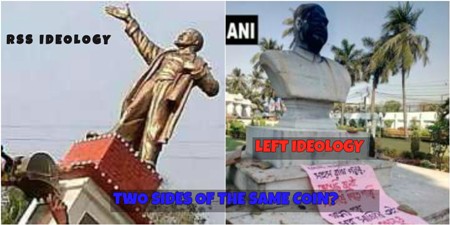 Desecration of Statues and The Left

Desecration of Statues and The Left

Editor-in-Chief of indiacommentary.com. Current Affairs analyst and political commentator. Writes for a number of publications. View all posts by this Author
Left and Right: Two sides of the same coin
Brinda Karat, writing in ndtv.com, has perhaps jumped the gun on desecration of Lenins statues in Tripura. In her tirade, she has said that such desecration shows the ideology of the RSS and the BJP. But even as she was writing her piece, members of a Left organization vandalized the statue of Dr Shyama Prasad Mukherjee in Kolkata. What about Leftist ideology, then? Vandalism and desecration of statues cannot be tolerated and those who did that with Lenins statue in Belonia are as guilty as those who did it to Mukherjees statue in Kolkata. Left-liberal ruffians are not superior to right-wing louts. Period.

Tripura stings. What about Kerala?
Karat might well see a planned conspiracy by RSS-BJP in Tripura. She also mischievously cites figures of arson and capturing of party offices in the state, engineered by the winning party. Confront her with the Bengal incident and she will say that it was the handiwork of misguided Left youth and not endorsed by the party. Confront her with figures of atrocities against RSS-BJP workers in Kerala and she will say that some amount of violence is bound to happen in political rivalries.

The Centre has advised states to deal firmly with all acts of vandalism
The fact is that louts from all parties are the same. The prime minister has spoken out strongly against the acts of vandalism. The central government has already issued two advisories to all states to take prompt action against miscreants who indulge in such acts of vandalism. Modi has also rebuked H Raja for his offensive comments against Tamil icon Ramaswamy Periyar. Yet, Karat says that the top BJP leadership is sending signals to its workers to desecrate statues of all those who oppose the Hindutva ideology.

Left worships mass murderers
It is also a fact that Left-liberals have the haughtiness to think that they are the rightful claimants of the high moral ground in society. They conveniently forget that Stalin and Mao were confirmed mass murderers who did away with millions of their countrymen just to ensure that they could rule without opposition. Despite the slogan proletarians of all countries, unite! (now popular as workers of the world unite, you have nothing to lose but your chains) the Left leadership all over the world has often chained, suppressed and murdered the working classes to remain in power. Karl Marx and Friedrich Engels must have turned in their graves and regretted writing that moving slogan after seeing Communist leaders use it to further their own ends. The Left has a vested interest in keeping the working class poor as prosperity leads them away from the Left ideology. The comrades in Bengal lost because they looted the state and with pot-bellies showing, started resembling politicians from any other party.

Left vote share going down, will become irrelevant
The Left tries to control the people like no other party does. It even settles family disputes in party offices. With aspirations rising, people find this an intrusion in their private lives. Karat gloats over the fact that despite losing in Tripura, the left retained 45% of the vote. Even in Bengal in 2011, despite being made to bite the dust by the TMC, the CPM had retained nearly 30% of vote share. But what happened subsequently? The CPM got only 23% in the general elections in 2014 and a pitiful 19.7% in the state elections in 2016. Recent by-polls have shown that the figure is now dangerously close to a single digit. The same is going to happen in Tripura. The Left cannot remain relevant in India with outdated ideology and hollow claims of high moral ground. It is evident from the way no opposition party is considering the Left while stiching alliances in preparation of the general elections in 2019. It is a far cry from the past when despite its limited electoral presence, leaders from Left parties were much sought after as they were considered to be the glue that could bring together disparate opposition parties. How the mighty have fallen!