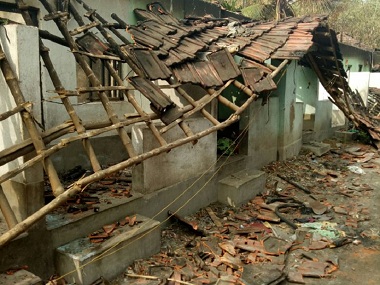 Editor-in-Chief of indiacommentary.com. Current Affairs analyst and political commentator. Writes for a number of publications. View all posts by this Author
Image as published in firstpost.com courtesy Twitter/@Leopard212

What is happening in Dhulagarh, a small town some 26 kilometres from Kolkata? Reports indicate that there was communal violence in the area a few days back. But the state government has imposed a clampdown on news from there. Reporters are not allowed. Even a team of BJP MPs was not permitted to reach there. What is the government hiding? For, if it does not allow news from the area, people will assume that something big has gone wrong and the government does not want it to be reported.

Mamata Banerjee is in denial mode. She told reporters questioning her about violence in Dhulagarh on Wednesday that nothing has happened, why are you asking me about it, let something happen then ask. This is a case of news suppression and denial even worse that the dark days of communism. People have lost homes and have been attacked and the chief minister does not even want to talk about it. Refusing to talk about something, however unpleasant, that has happened smacks of authoritarianism and worse. Being a peoples leader, the otherwise loquacious chief minister should not take this route.

By all accounts, both communities have suffered in the violence that took place. Although the state government has brought the situation under control, people are entitled to know what exactly went wrong in a state that is held as an example of communal peace despite having a huge Muslim population. Hiding news and suppressing facts got no one anywhere far and the state government is making a big mistake.Even if it was a small incident that was quickly brought under control, it is a bad omen for the state and people should know about it from official sources rather than through rumour mongers.

Pictures emerging from some news teams that went to the area before restrictions show that homes were ransacked and set on fire and shops were looted. Hindus and Muslims seem to have suffered equally. If people do not know what triggered this rare incidence, there will be repeats elsewhere in the state. Suppression of news often gives way to wild rumours, which carries an infinite risk of further mischief. There are all kinds of rumours floating about the Dhulagarh incident in the state. The government should come out with the facts to set the record straight.