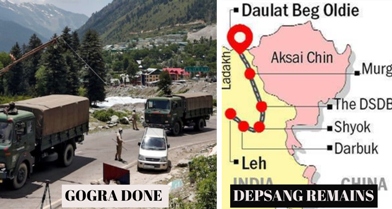 Disengagement At The LAC: Untangling The Web

Disengagement At The LAC: Untangling The Web

It is very easy for tensions to escalate at the borders or lines of control between two nations when they have a history of disputes and when one of the nations is given to frequent intrusions. India and China have been engaged in multi-level negotiations to deescalate the recent tensions which started on multiple flashpoints in March-April 2020 in the midst of the pandemic. Hence it is good that the after the 12th round of military commander-level talks between the two countries, disengagement has happened at Patrolling Point (PP) 17A at Gogra Post in Eastern Ladakh and the troops of both countries dismantled the temporary structures and receded to agreed positions inside their territories. This, after the earlier the more critical disengagement at the northern bank of Pangong Lake in February this year, means that both the countries are willing to resolve the dispute one post at a time and that is the way it should be.

But there has been no breakthrough regarding the main point of contention, the Depsang area. This the point where the Chinese made the deepest incursion followed by erection of permanent structures and massive build up of troops on their side of the LAC. They have also prevented Indian troops from patrolling beyond a point that is nearly 18 km inside the territory controlled by India. This is of huge concern as, if and when both sides come to an understanding in Depsang, the Indian troops will be pushed further inside their side of the LAC under the guise of a no-patrolling zone (as it has happened in cases where disengagement has already taken place). Later, as is their wont, the Chinese will claim the territory they have already intruded into as their own.

Hence, while it is good to pluck low-hanging fruits and settle disputes at flashpoints where there was low buildup and consequently lesser tension, India must not give in to the Chinese in case of Depsang. Any agreement there must be on the basis of positions that existed before the Chinese troops intruded deep inside Indian-controlled territory. The no-patrolling zone must also be from that point so that the troops of both nations move back inside the area controlled by them. Otherwise, the Indian troops will be put at a permanent disadvantage in an area that is strategically important as it is of relatively flat terrain and the Chinese can, stealthily and rapidly, make further incursions and gain control of the important 255-km Daulat Beg Oldie Road which was constructed by the Border Roads Organization after overcoming all obstacles and which gives India a strategic dominance in the area.