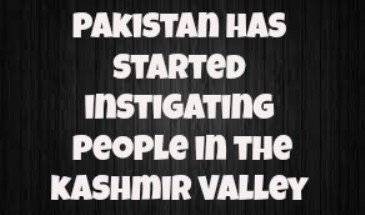 Disturbances In Kashmir After Imran's Speech At UNGA: Clear Proof Of Instigation

Disturbances In Kashmir After Imran's Speech At UNGA: Clear Proof Of Instigation

If there was any doubt in the minds of some people about who instigates people in J&K, the disturbances in Srinagar and some other parts of Kashmir valley hours after Pakistan's Prime Minister Imran Khan ended his speech at the UNGA would have cleared that. As if on cue, miscreants started using loudspeakers from mosques, which were playing azadi tunes after the speech, to exhort people to come out on the streets in support of what Imran called "freedom for Kashmir". There were some disturbances as a large number of people took to the streets. Before that, security forces had killed 9 terrorists, including three in a 9-hour hostage drama in Ramban district of the state. A soldier also died in the operation.

This has been the major disrupting factor in Kashmir. Pakistan knows it cannot take the rest of the Kashmir (it already occupies a large part of the state illegally) by force. Hence, it has used all means to tell the Kashmiris that they are different and they should fight for their freedom from India. It uses influencers, sends terrorists and gives money to youth and children to throw stones at Indian security forces. The narrative of Imran's address to the UNGA was also the same. He talked of "bloodbath" and "genocide". Puppets of Pakistan in the valley have picked up the narrative and have started creating disturbances.

The people of Kashmir will have to realize that it is Pakistan's strategy to first make them fight for independence and then gobble them up once it is achieved, which is never going to happen. They have to realize that they cannot talk of azadi after enjoying the fruits of development from India for more than 70 years. If they are backward, if development has not happened at the same pace it has happened in the rest of the country, it is only because they have allowed Pakistan and Pakistan-backed politicians and subversives to brainwash them into believing that they should demand azadi from India.

If azadi is such a big deal, why is no one in the Kashmir valley talking about Pakistan-occupied Kashmir (PoK) and demand its azadi from Pakistan? Why only azadi for J&K? Why is no one talking anymore about a unified Kashmir? Instead of demanding azadi from India, the people of Kashmir should start asking Pakistan to get out of PoK and return the territory to India so that a unified state of Jammu & Kashmir can be developed fast under the Indian constitution and the various schemes of the government of India.