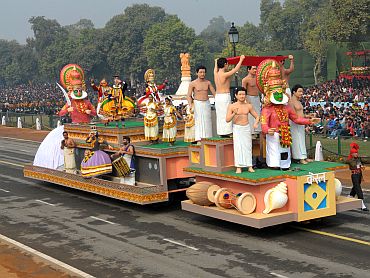 Do Not Politicize The Republic Day Parade

Do Not Politicize The Republic Day Parade

The Republic Day parade is not something that should be made the subject of controversy. States like West Bengal and Maharashtra have alleged that their tableaux were rejected this year as they oppose the BJP. Before making such a serious allegation, the states should have studied the matter in detail. It is obvious that a state will be pained if its tableau is rejected as several months of planning and ideas go into its making. But they should understand that there are only a limited number of tableaux that can make it to the final parade due to various constraints. As all states send their proposals, the final selection is done by an Expert Committee made up of eminent persons who evaluate each proposal on the basis of several criteria. Since these eminent persons are drawn from diverse fields like art, sculpture, music, choreography, painting, culture and architecture, their selection should be respected.

The government has released a list where it has stated that while the tableaux of four BJP-ruled states, namely Haryana, Uttarakhand, Tripura and Arunachal Pradesh have also been rejected, those of seven opposition-ruled states like Madhya Pradesh, Rajasthan, Andhra Pradesh, Chhattisgarh, Punjab, Telangana and Odisha have been selected. Hence, it is improper to accuse the government of bias. It is also not good to cast aspersions on the Expert Committee that was tasked with selecting the tableaux. The government can only stand accused of bias if it is found that it had rejected a tableau of any opposition-ruled state after it was selected by the Committee. Since that does not seem to be the case, states like West Bengal and Maharashtra should desist from politicizing an important event like the Republic Day parade for petty political gains. They should accept the non-selection as a valid decision of the Expert Committee, recognize that others were better than them and should move on.