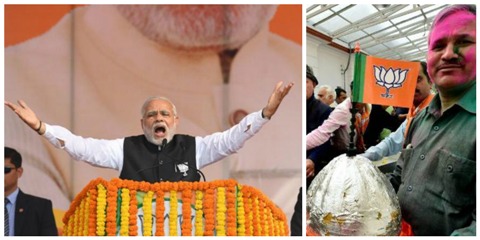 Editor-in-Chief of indiacommentary.com. Current Affairs analyst and political commentator. Writes for a number of publications. View all posts by this Author
The results of the assembly elections have proved and disproved a few commonly held myths of Indian politics. The first and foremost myth was that UP is so badly ridden with caste politics now that it is impossible for a national party to break the constricted thinking of the voter, that does not go beyond his immediate caste affiliation. Narendra Modi and Amit Shah had shattered that myth in 2014 Lok Sabha elections. Then, apologists of the so-called liberal Left wing media had consigned it as a one-off event, done by the anti-incumbency and lost appeal of the Congress. But when it is repeated, with even more gutso now, these apologists have nowhere to hide. Despite several charges of corruption and land grabbing against the Yadav family and ministers in the Akhilesh government, a section of the media openly projected the younger Yadav as a beacon of development and uplift of the backward classes. The Modi-Shah combine has shown twice that class war is more important to the people than the caste war.

Akhilesh Yadav ran a pseudo government, one that built some roads and highways as a front for the more nefarious activities of all sorts of SP leaders. It was almost a throwback on the Mafiosi era in the US when legitimate businesses acted as fronts for all kinds of blackmail, hafta-wasooli, bootlegging and prostitution rackets. But Akhilesh remained the darling of this section of the press. Even the sordid family drama played out in public did not deter the commentators from promoting the Yadav clan. Open Muslim appeasement (kabristan and Ramzan) leads to a backlash if one party can make Hindus transcend the caste barrier and think as a whole. This happened with huge seriousness this time. Even Muslims were exasperated enough by token gestures of SP and despite the BJP not fielding a single Muslim candidate, there are reports of the community voting for the party. Getting 324 seats in a state where 20% of the population is Muslim (and they have been given a false sense of political superiority by other parties by pandering to local leaders who incite the simple Muslim folks) without a single Muslim candidate blows away the thesis that you cannot win UP without the Muslim vote. This was another myth that was shattered.

The next myth was that when two parties enter an alliance, their respective vote shares get combined. The SP allied with the Congress this time and the results were disastrous. Rather than combining the loyal voters of the two parties, the alliance seems to have driven them away from both. A lackluster term from Akhilesh combined with a non-performer like Rahul has pushed the alliance to the extreme backbenches. They can now cry on the shoulders of papa and mummy respectively, like spoilt sons given a huge thrashing. If Modi-Shah are donkeys of Gujarat as Akhilesh had said during campaigning, the people of UP have shown their preference for them over assorted and unrecognized homegrown species.

India has changed. Yadav, Kurmi, OBC, Dalit, Jatav do count in some places but overall, aspirations driven by an urge to better ones station in life have overtaken several age old calculations. Narendra Modi has perfected the art of making the voters finger press the lotus symbol on the EVMs guided by this angle more than any other thing. The Left liberals have not understood this and continue to harp on the outdated notions of workers unity and dole based politics. No youngster in India today is willing to stand in a queue to get handouts. He is rather willing to sweat it out at the workplace and buy things like all other do with his own hard-earned money. In Modi they see a person who talks their language. Everyone in India was fed up with people in politics getting away with scams. Modi has given them a scam-free government for the last two and a half year. All of India is sick of Rahul Gandhi and treats him as an ignoramus. Regional parties and their pot-bellied satraps, who run these parties as family concerns, are also losing favour with the people. People have come to recognize that these leaders just falsely stoke their imagined fears and get rich. In such a scenario, Modi has a credible face, reinforced by the proof of being a karmayogi. His clean image is a huge hit. Modi is seen as a doer, and the youth finds in him someone who can change the face of India. They are giving him chances as unlike the media, they know that it will take time to dust away the cob-webs of the past.

But the BJP has to be careful in fulfilling the massive mandate. As Punjab and Goa have shown, people give chances but they expect performance. The Goa experience must have made the party wiser. Replacing Manohar Parrikar with a non-entity who never got off the blocks and ruined the state was a huge mistake. The people have punished the party for that. In Punjab, continuing with an alliance in which the senior partner, the Akali Dal, was ruining the state was not advisable. If the alliance was not to be broken, then at least the Badals must have been asked to mend their ways. People took Modis silence on the excesses of the Badals as approval and have voted the alliance out. Modi must recognize that his brand value can draw the crowds, but to keep them engaged, he will need to ask his state leaders to perform. An expectant population can propel you to the stratosphere but an angry one can bring you crashing down with an impact that can finish you. In the next two years, the karmayogi in Modi needs to pass on some of his tireless energy and his way of thinking to the ministers in his cabinet and the chief minister and other ministers in states ruled by either the party alone or in alliance with other parties. Only then will the BJP win in the mini-elections in 2018 and the big one in 2019.