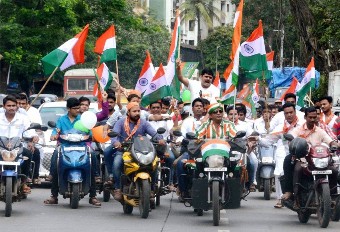 Editor-in-Chief of indiacommentary.com. Current Affairs analyst and political commentator. Writes for a number of publications. View all posts by this Author
There is no harm in taking out Tiranga rallies on bikes after taking prior permission from the administration. But when these rallies are taken out with the express purpose of needling Muslims by going to areas dominated by them, shouting Pakistan murdabad and engaging the minority community in a slanging match with an itch to get into a fight, these assume the colour of saffron rallies. The one in Kasganj in UP that triggered the upheaval was exactly like that. It is clear from reports from the ground that celebrating Republic Day was nowhere on the minds of the participants. All they wanted was to incite the Muslims and disturb the peace.

The Bareilly DM (now transferred) Raghvendra Vikram Singh has revealed that it has become a trend for some people to go to Muslim dominated areas and shout Pakistan murdabad. It is a sign of the times that Singh was forced to delete his post and was transferred for speaking the truth. If it stops at that, the Muslims will not mind as being Indian citizens they cannot have any objection to slogans calling for the downfall of the nations enemy. But when this sloganeering later starts targeting them as Pakistanis, they have to object. It is disconcerting to find even educated people calling Muslim dominated areas mini Pakistans. In Kolkata many people refer to Metiabruz by that name. In UP, it is common to find people giving that name to any such area in all towns. This is a dangerous trend which needs to be reversed.

It is good that the administration in Bareilly and contagious districts are taking immediate steps to control the flare-up. But there are miscreants on both sides. The administration must take care to ensure that there is no discrimination in arresting people only from one community. There are reports that Hindu radical outfits are trying to escalate the issue by planning similar rallies in nearby districts such as Etah and Agra. Permission must not be given for such rallies. The administration must make elders from both communities sit and smoke the peace pipe. It must drill it in the heads of Hindu radical outfits that such behavior will not be tolerated at all. Those disturbing communal peace must be arrested, tried in fast track courts and handed out exemplary punishment to deter others.