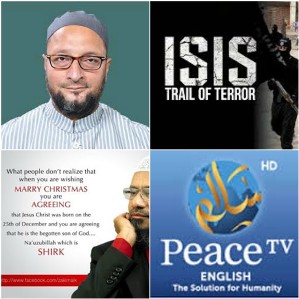 Doublespeak: ISIS is Evil But Zakir Naik is Not

Doublespeak: ISIS is Evil But Zakir Naik is Not

Editor-in-Chief of indiacommentary.com. Current Affairs analyst and political commentator. Writes for a number of publications. View all posts by this Author
Just as one was applauding Asaduddin Owaisis statesmanship in scathingly rejecting the IS and its nefarious designs of an Islamic state, one is disturbed by his party AIMIMs misplaced sympathy for, and defence of, Zakir Naik.

Owaisi was spot on when he said that IS operatives were enemies of Islam and humanity and were dogs from hell. He also advised the Muslim community to recognize the problem of the IS and prevent the Muslim youth from joining the death cult that goes by the name of Islamic State. He described true jihad as educating and feeding the poor and funding the education and marriages of girls. He also called upon Muslim youth to respect the democratic and pluralistic tradition of India and seek redressal of grievances through democratic means in India.

But a few days later, Imtiaz Jaleel, the AIMIM legislator from Aurangabad, issued a statement saying that the AIMIM supports Zakir Naik and the media should stop hounding him on baseless charges. Calling him a specialist (of what, one wonders), Jaleel said propagating ones religion was not a crime and if Naik was guilty, the law will take its own course. The legislator once again said that his party condemns IS and Al-Qaeda as they are evil groups.

Can one see a line of thought in this? Is it a turf war Muslim leaders in India are fighting with the IS? Are foreign terror groups, controlled by self-styled caliphs, a threat to our home grown leaders of the Muslim community as they are luring the youth with rousing rhetoric? Do they feel their areas of influence shrinking? As they can never match the dangerous rhetoric of IS and Al-Qaeda which openly calls upon the youth to kill for Islam, are Indian Muslim leaders left with no alternative but to denounce these outfits?

But the AIMIM feels that the same is not true for people like Zakir Naik, who despite their obvious potential for greater mischief, are seen as non-political preachers who will radicalize and drive the youth in the arms of parties like AIMIM. Jaleel says one can propagate ones religion without hurting the religious beliefs and sentiments of others. That is absolutely fine. But does Naik do this? His speeches and answers to queries from the audience are full to denigrating references to other religions. His speeches are inflammatory. If no action was taken against him till now, it was because no one had complained. Also, supposedly secular politicians allow such preachers to get away as they do not wish to disturb their assiduously cultivated vote banks. But now, a neighboring country has complained after a terror attack on its soil.

Such double speak on the part of AIMIM is not good. If ISIS is evil, Naik is also evil in the sense that by denigrating other religions in his speeches, he is sowing the seed of hatred in the minds of Muslim youth. They will then not seek the democratic avenues that Owaisi talks about, but will be radicalized to kill for Islam, as the affluent youngsters were in Bangladesh. For this reason alone, Naik is also very dangerous and cannot be supported.