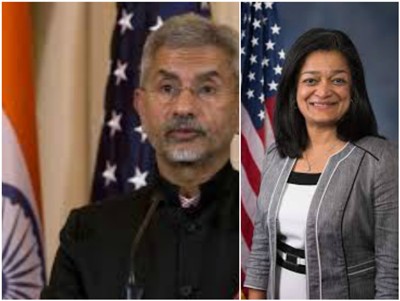 A section of the media is raising a needless controversy over a cancelled meeting in Washington DC. India's External Affairs Minister S Jaishankar was to meet the powerful House Foreign Affairs Committee (HFAC) in the US capital. But when he came to know that Democrat Congresswoman Pramila Jayapal was also invited, he cancelled the meeting. The move was criticized widely in the US, including by Democratic Presidential hopefuls Bernie Sanders and Elizabeth Warren. Later, ministry officials said since Jayapal was not a member of the HFAC, the minister was under no obligation to meet her.

Jayapal is famous for having introduced a resolution in the US House of Representatives that called for India to remove all restrictions on communications in Jammu & Kashmir. Her views on India are well known. In that sense, she is what is called an "India baiter" in the US. Since she was not a member of the HFAC, the minister rightly refused to meet her. The HFAC had neither informed beforehand nor taken permission from the Indian side to invite 'outsiders', in whatever capacity, during the meeting between Jaishankar and the Committee. The minister was right in cancelling the meeting in the face of the changed situation.

The US lawmakers and the Democratic Presidential hopefuls might argue that this was unwarranted but they are seeing just one side of the picture. Why should the foreign minister of a sovereign nation be forced to meet someone who he knows has a vicious agenda against his country and more so when that person is not even a member of the original committee with whom the meeting was fixed? It is standard practice in diplomatic circles to obtain a list of those who will attend meetings in advance so that the dignitary can prepare himself for any eventuality. Jayapal's name was not on the list as she is not a member of the HFAC and she was added later. How could Jaishankar have agreed, then, to let Jayapal hijack the meet with her barbs at India's J&K policy?