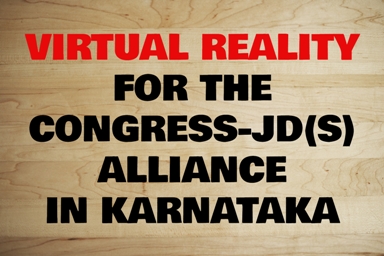 Fasten Your Belts, More Action Coming Up In Karnataka

Fasten Your Belts, More Action Coming Up In Karnataka

Editor-in-Chief of indiacommentary.com. Current Affairs analyst and political commentator. Writes for a number of publications. View all posts by this Author
BJP leader BS Yeddyurappa gave it three months, others six. Most people are skeptical about the opportunistic Congress-JD(S) government lasting its full term. But no one thought differences would crop up so soon. First, deputy CM and Congress leader G Parameswara categorically stated that there had been no discussions on the issue of rotation of the post of chief minister, meaning that Kumaraswamy could not take it for granted that he was CM for the full term of five years. Now, CM Kumaraswamy has admitted that issues have arisen over portfolio allotment and hence allocation of departments has been kept on hold till the state Congress leaders return from Delhi after getting clearance from their party high command. The chief minister also clarified that there was no question of his going to Delhi to talk to Sonia and Rahul Gandhi as it was an internal matter of the Congress. Carrying on, he also issued a veiled threat of quitting if matters were not amicably settled by saying that otherwise, I will see. I will not stick to this post, leaving my self-esteem.

This was waiting to happen after the way the Congress high command capitulated embarrassingly immediately after it became clear that the BJP was not going to cross the half-way mark. In trying to outwit the BJP and prevent it from snaring MLAs, the Congress not only offered unconditional support to the JD(S) but agreed to make HD Kumaraswamy the chief minister without discussing a rotational policy. The high command was thinking about its position vis-à-vis the BJP on a national level. But in its haste to be one up on the BJP, it failed to take into account the aspirations of the state leaders in Karnataka. The high command knew that since they did not have a pre-poll alliance with the JD(S), wasting time over discussing modalities would have given BJP the much needed time to indulge in tod-jod. Speed was of prime importance (especially after the fiascos in Goa, Meghalaya and Manipur) and the Congress leadership unthinkingly offered unconditional support to the JD(S) just to keep the BJP away.

But it now seems that decision is going to blow in its face. Regional Congress leaders will not agree to be sidelined by CM Kumaraswamy, not after getting 38% vote share and 78 MLAs compared to the 18.3 and 37 of the JD(S). They will come to terms with conceding the post of the chief minister, for without that it would have been impossible to bring JD(S) on board given the burning ambition of the Gowda clan. But when it comes to running the state, Congress leaders will pull their weight and demand top ministries like home, finance and PWD. Kumaraswamy, on the other hand, knows that the Congress needs him more than he needs them. So he will try to rub it in completely. Maybe the matter will be resolved (what with the entire galaxy of opposition stalwarts having a stake in ensuring that this alliance works smoothly). Maybe Mayawati will broker peace. Maybe other opposition leaders will do the same. But the fact is that state Congress leaders  mainly the sidelined and maligned former CM Siddaramaiah  are not going to let the JD(S) punch above its weight and would demand their pound of flesh. It remains to be seen how Kumaraswamy responds and how soon, or late, the balloon of his 'self-esteem' is deflated.