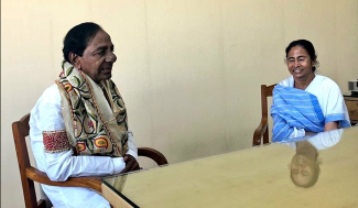 View all posts by this Author
The efforts for a non-BJP, non-Congress front gained momentum when two of its chief protagonists  Telengana chief minister and TRS supremo K Chandrasekhar Rao and West Bengal chief minister Mamata Banerjee and TMC supremo Mamata Banerjee met in Kolkata to discuss about it. KCR came calling to the city underscoring the importance of Mamata Banerjee, who is increasingly being seen as the fulcrum of non-Congress unity although the redoubtable lady herself is not averse to including Congress in her scheme of things. This was evident in the way she accommodated the partys Abhishek Manu Sanghvi as a RS candidate from the state.

Emerging from the meeting, KCR told reporters that "people are thinking before 2019 there will be another front. Let me clarify that this front will be for people of India. This won't be a mere alliance of a few political parties, this will be for the people. There is a need for alternate force." When asked about the tricky question of leadership, KCR said that there would be collective and federal leadership. But the constitution mandates one person to be the prime minister. Who will that person be? KCR had no answer. Maybe the front will play musical chairs and have prime ministers for six months each from all the regional parties.

Mamata Banerjee, apart from saying that they are in touch with other parties to make the front strong made an interesting comment. She said that one party should not rule the country. But when it comes to ruling the state, she has no qualms about one party  her party  ruling it. There cannot be different rules for the Centre and the states. The regional parties can come together and challenge the bigger parties but the ultimate power rests with the people. It remains to be seen if the people are impressed with a hastily-cobbled alliance of parties that cannot see beyond the borders of their own states. It also remains to be seen whether these parties can succeed without the Congress which still is the principal opposition party in large parts of the country.