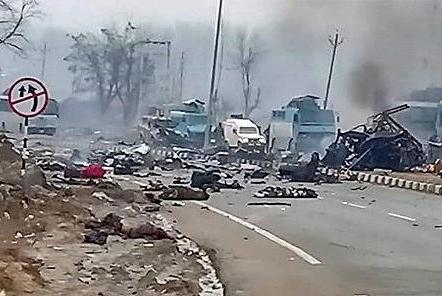 Editor-in-Chief of indiacommentary.com. Current Affairs analyst and political commentator. Writes for a number of publications. View all posts by this Author
The reprehensible attack on the CRPF convoy in Pulwama district of J&K, which killed 40 security personnel, is one more instance of how Pakistan-backed terrorists will never let peace to prevail in the state and in the rest of India. Although the suicide bomber was a local lad, the very fact that he joined Jaish e Mohammed, the dreaded terrorist organization supported by Pakistan, just a year ago shows how handlers in that country poison the minds of youngsters and prepare them for jihad. The stamp of an ISI-backed operation is clear in the way the attack was carried out.

India has rightly held that Pakistan is behind the attack. It is beyond the capacity of a local lad to arrange for 60/70 kgs of explosives and then plan the attack to perfection. The planning for the strike was, without doubt, done in the neighbouring country and they also provided material and logistics support for the same with obvious help from traitors on this side of the border. Adil Ahmad Dar was only the executor.

India has moved fast to revoke Pakistans most favoured nation trade tag and has called the Indian High Commissioner to that country to Delhi for consultations. The government has also decided to review the security cover of all Kashmir leaders who receive money from Pakistan. It has also explained the position to ambassadors of most countries. The US and Israel have led the international community in condemning the attack. The US has also put pressure on Pakistan to stop helping all kinds of terrorists in its country. Although Pakistan has denied any hand in the attack, India should keep up the pressure on the international community to bring the country to heel.

Among the many options India has, conducting another surgical strike inside Pakistan to destroy terror camps is one. But it needs to be remembered that surprise was the biggest factor for the success of the last surgical strikes. This time though the Pakistanis will be prepared. Hence, instead of the probability of having egg on its face through any hastily conceived misadventure, the government must study all angles in detail. The best way to tighten the screws would be to go after known sympathizers and the hawala operators in the state who make money available to these terrorists. If funds dry up and local help is not available, there is a chance that terror activities will reduce.

The second way is to work towards restoring normalcy in the state by first installing an elected government. Creation of jobs is the next step. Pakistan will never want the state to develop and people to have jobs and a happy life. That would take away the main reason why youngsters join terror groups. Then, the government must take some trust building action. But one is not sure if all that is possible in a state where even mainstream politicians speak with a forked tongue and are not averse to praise Pakistan. The government has done the best thing to call an all-party meet on the issue. There must be political consensus on how we should move ahead.