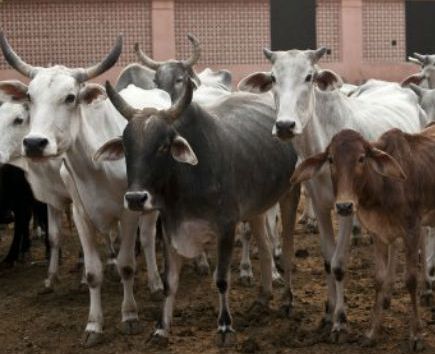 Gau Raksha is Just an Excuse to Target Muslims and Dalits

Gau Raksha is Just an Excuse to Target Muslims and Dalits

Editor-in-Chief of indiacommentary.com. Current Affairs analyst and political commentator. Writes for a number of publications. View all posts by this Author
Gau raksha is just an excuse and gau rakshaks of the current kind are nothing more than petty criminals targeting Muslims and Dalits. It is the worst form of terror being unleashed by misguided elements in the majority community to disturb the social fabric of the nation in order to assert their supremacy. The killing of Pehlu Khan in Alwar, Rajasthan is deplorable and must be condemned by all right thinking citizens. The real gau rakshak (and I have come across many such zealous people) will not be found on the streets looking for Muslims or Dalits to lynch. He or she will be found in a gaushala, either donating for its upkeep or buying its products to support it or even tending to cows and calves sheltered there.

Shutting down illegal abattoirs that have existed for so many years by greasing the palms of corrupt officials is absolutely the right thing to do. But killing people who make a living through the legal business of running abattoirs is not. Not eating beef or cow meat is a matter of ones own preference. But forcing others not to eat it in a secular, democratic country is not proper. Targeting people for their eating or dressing habits or appearance is the worst form of divisive politics. It has the potential of unleashing anarchy in the country. The government must crush all these criminal acts with an iron hand.

How and why have these groups come into being? What emboldens them to carry out their nefarious activities without fear? The answers to these questions are quite easy if one has been following recent events. At any point in most communities, there are several hotheads who are captivated by the doctrine of them and us and how we are superior to them. They get a lift when mainstream votaries of the doctrine start their propaganda war and carry out actions to try and assert their superiority. But the mainstream groups can only go thus far and no further. This disillusions these highly committed but unattached persons and they take it upon themselves to help the cause by doing what the larger groups cannot. They find like-minded persons and start attacking them.

Of course it helps to have a friendly government in place. The fear of prompt and punitive action against them is largely diminished. They are also secure in the knowledge that there will not be a sustained combing operation against them. They know they can carry out one such act, lie low for some time and strike again. There is an old saying in Hindi that morey sainya bhaey kotwal, ab dar kahe ka (loosely translated as when my friend is the sheriff, whom do I need to fear). This is what is happening. In the meantime, hate speeches by supposedly responsible politicians and self-styled godmen keeps refueling their commitment to the cause and even gives birth to more such groups.

Prime Minister Modi often talked about sabka saath sabka vikas in his campaign speeches in 2014. He also talked about growth and empowering the poor. In a famous speech, he exhorted Pakistan to stop fighting India and work towards jointly fighting poverty and illiteracy in the two countries. Then why is he allowing the fringe elements to hijack his growth agenda? All the good work (and there is plenty of that to talk about) his government has been doing is coming to naught in the face of muscle-flexing by majoritarian forces. In the larger fight between decades old, entrenched Leftist forces in all institutions in India and the Rightist attempts to dislodge them on the back of an electoral victory, it is the poor, the minorities and the marginalized who are suffering. This state of affairs is highly damaging to the social fabric and has the potential of derailing growth.

The duty of any elected government in a secular, democratic country is to ensure peaceful existence of all its citizens. Any talk of growth and empowerment sounds hollow in the face of existential crisis. It also creates an atmosphere of fear which is not conducive to attracting foreign investment, a thing for which the prime minister has been working tirelessly. Make in India can only be implemented if India provides stable and peaceful working conditions. Foreign investors will always be wary that the majoritarian forces can turn against them for being usurpers of Indian resources and remitting profits abroad. Political stability is a must for business investments but social stability is equally important for no one likes to invest in a country whose people are at loggerheads with each other. With his elevated stature within the party post single-handedly taking the BJP to a landslide victory in 2014 and now in Uttar Pradesh, Narendra Modi has a big responsibility in this regard. All it will take is a series of stern warnings from the Prime Minister aimed at these rowdies to galvanize law enforcement agencies, bring a modicum of sanity in the public utterances of his party leaders and stop the mischief mongers in their tracks. Is this too much to ask of a man who wants to transform India?