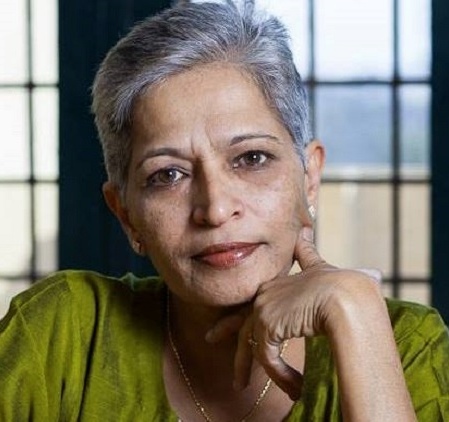 Editor-in-Chief of indiacommentary.com. Current Affairs analyst and political commentator. Writes for a number of publications. View all posts by this Author
When one does not like someones views, one has many options to tackle the situation  the most extreme and inhuman option being to kill that person to silence his or her voice. No educated, cultured or sane person will take the extreme step. That someone took this extreme step against journalist and activist Gauri Lankesh proves that she lost her life because some people hated her for holding the views she held.

Gauri was never well disposed towards the big daddy of Hindutva, the RSS. She would often criticize every action of the militant outfit. She was also very active in the Naxalite belt and was seen as sympathetic to their cause. But she had also been trying to bring the hardliners into the mainstream. She had persuaded many comrades to surrender and start life afresh. In fact her brother has said that some Naxals were angry at her for organizing these surrenders and that may be the reason for her death, but it seems to be a red herring.

For every person who thinks the RSS is doing a yeomans service in uniting the Hindus or in preventing the marginalized people from turning to Islam or Christianity, there are thousands of Hindu Indians, among others, who think that the RSS is instrumental in dividing communities along religious lines. For those who think the RSS is a social service organization, there are thousand others who think it is a backroom political organization that drives the BJP. This difference of opinion has continued ever since the RSS was born. It does not mean every person who believes RSS is good will go around killing every person who doesnt believe so.

Gauri Lankesh was killed only because the government at the Centre has not done enough to quell the atmosphere of intolerance that is sweeping the country ever since the BJP swept to power riding the charismatic personality of Narendra Modi. Be it cow vigilantism, ultra nationalism, dictates on eating habits or murders of rationalists, the central government  more specifically the prime minister himself  has not spelt out in clear terms that the police need to deal with the situation promptly and with the impartiality it demands. Saying that this or that will not be tolerated, as PM Modi has been saying intermittently, will not suffice. The police must be given powers and ordered to arrest these miscreants without any delay.

If matters are allowed to go out of hand, there will be more murders. The hate lines between communities will get deeper and bolder. Indian will fight Indian like they have done never before. Then, all talk of inclusive growth (sabka saath sabka vikas) and Make in India will sound hollow. Nothing that PM Modi has set out to achieve (he wants to transform, not reform India he says) will be achieved if communities cannot live in peace with each other or if people are singled out and killed if they hold views inimical to the ruling establishment. Before digital India Modi has to strive for a tolerant India if he wants his dreams to fructify. He has to deal with miscreants in the Sangh parivar with an iron hand. It remains to be seen if the RSS will give him that authority.