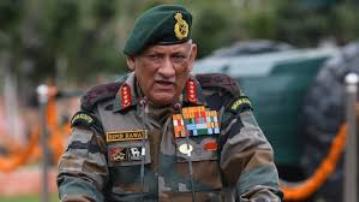 General Rawat And His Idea Of "Inappropriate Directions"

General Rawat And His Idea Of "Inappropriate Directions"

India's armed forces have largely been apolitical. Hence, despite witnessing military dictatorships in the neighbouring countries, India has remained free of the malaise. Yet, in recent times, the trend of retired army officers joining political parties has grown. There is no harm if a retired general wishes to continue serving the country in a different capacity. But when a senior officer makes a political comment while in service, ostensibly with an eye to gain favour with those in power or even otherwise, it not only lowers the prestige of the armed forces but also holds dangerous portents for the future.

Hence it is that General Bipin Rawat's recent comments regarding protesting students need to be condemned by all right-thinking people. General Rawat is the Chief of Army Staff and a distinguished officer. He is due to retire on December 31. The grapevine has it that he is the frontrunner to be the first Chief of Defence Staff (CDS). Given the apolitical nature of the armed forces, it was highly inappropriate (and one is using a mild term) for General Rawat to make a comment of this nature at this time in his career. Such a remark from an army officer of his stature can never be condoned but coming at this time, it immediately opens General Rawat of trying to cull favour with the ruling dispensation. But in doing so, he has done irreparable damage to the neutral image of the armed forces.

General Rawat said, "leaders are not those who lead people in inappropriate directions, as we are witnessing in a large number of university and college students, the way they are leading masses of crowds to carry out arson and violence in our cities and towns". All Indians are pained at the arson and violence during the otherwise peaceful protests being carried out by the students and ordinary citizens. These protests have largely been apolitical in most cities and towns. General Rawat could have expressed his anguish at the same and no one would have faulted him for that. But by talking about "leaders" and "inappropriate directions" he laid himself open to charges of political comments and the reason for his comments became suspect. The government should ideally look for someone else to be the first CDS after this.