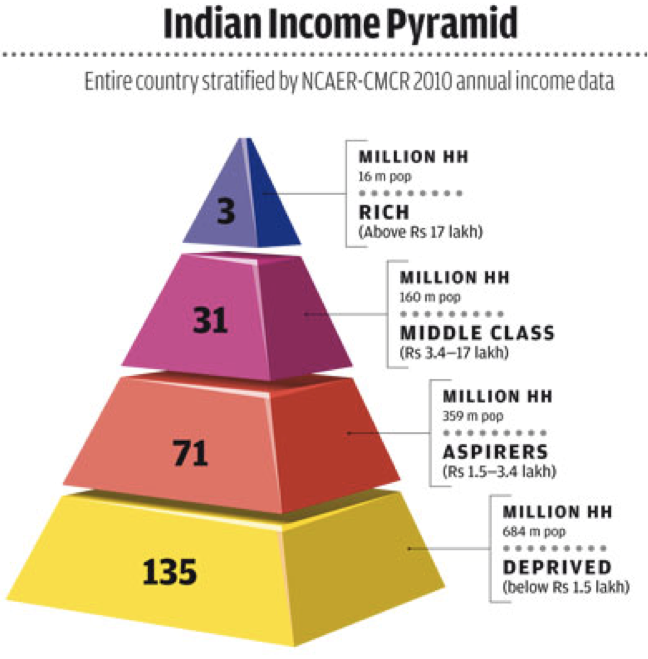 How Globalization is Increasing Inequality in India

How Globalization is Increasing Inequality in India

Reading for MSc in Economics at Calcutta University. Aspiring economist and writer. View all posts by this Author
The theory of comparative advantage suggests that with an increase in globalization, income inequality in poorer countries should decrease. However empirical findings suggest that with an increase in the global market, inequality further increases. The World Bank defines globalization as interdependence of countries resulting from the increasing integration of trade, finance, people, and ideas in one global marketplace. It is the integration of economies, industries, markets, cultures and policymaking around the world. With time, due to rapid increase in trade across boundaries, does a relationship exist between globalization and income inequality?

Globalization has brought far reaching consequences in the economic well-being of individuals of all the regions of the world and more importantly among all income groups. But according to some authors, it has been accompanied by an increasing rate of inequality in terms of income distribution. And this has happened in both developed as well as developing nations. The empirical evidence on growth and income inequality seem to contradict the optimism of the proponents of globalization. For most countries, the last two decades have brought about slow growth and rising inequality.

By the Hecksher-Ohlin model and one of its theorems, the Stolper Samuelson Theorem, an open economy leads to an increase in both real and nominal return on the abundant factor in a country and a converse effect on a scarce factor. But according to Robert Barro the standard theory seems to be in conflict with the concerns expressed in the ongoing popular debate about globalization. The general notion is that an expansion of international openness will benefit most of the domestic residents who are already well-off.

The 1990s were crucial in the economic timeline of India. The economy was opened up and there was an influx of foreign investments. With India turning into a global village, the social, cultural, economic aspects of the country changed over time. The dearth of employment in the 80s was replaced by the new jobs that were brought in by the multinational companies that invested here. With the Information Technology hub being set in Bangalore initially and elsewhere later, the economy started showing promise. But whom did these jobs actually go to? When almost 80 percent of the labour force in the economy is involved in agriculture, it will definitely lead to an increase in inequality when almost all the investments occur in the private sectors, that too mostly in the IT and infrastructure sectors. A big number of multinational companies that come to this country mostly invest in these two sectors. A small number of highly qualified people are getting high profile jobs, with huge salaries. But a vast majority of the population is unaffected by this. Rather many are affected adversely by globalization.

Whatever foreign direct investments are occurring in the education sector, it caters only to a certain section of the society. At the primary and secondary level, only 29 percent of the students receive education from the private schools, the schools where the foreign companies invest. The rest, that is, the government run schools lack a lot of facilities, infrastructure and thus a further inequality is created. Moreover, most of Indias labour pool is unskilled and lack the basic skills required to work in a multinational company. Thus, the minority percentage who get the required skills are getting the highest benefits, while the majority of the population lies below the poverty line. Thus, in a country like India, it is very clear that globalization has led to an increase in inequality. According to a survey, 75 percent of technical graduates and more than 85 percent of general graduates lack the skills needed in Indias most demanding and high-growth global industries such as information technology. These high-tech global IT companies directly or indirectly employ less than 1 percent of Indias labour pool. The informal sector, which forms about 90 percent of the work force, is widely unaffected by this globalization (often it is adversely affected). So more often than imagined, these are the people who keep on getting poorer.

Thus, we can conclude that even though the neoclassical models state that inter-country trade reduces inequality, the empirical results say something else. What can be done about the resulting challenge to global security, stability, shared prosperity, and most fundamentally to global social justice? Because global markets work better for the already rich (be it with education or for countries with stable and sound institutions), we need something closer to a 21 global social contract to address unequal endowments  to increase educational opportunities for the poor and vulnerable, and to help countries build sound institutions. Because global markets are imperfect, we need global regulatory arrangements and rules to manage the global environment (Kyoto and beyond), help emerging markets cope with global financial risks (the IMF and beyond), and ways to discourage corruption and other anti-competitive processes (a global anti-trust agency for example). And because global rules tend to reflect the interests of the rich, we need to strengthen the disciplines that multilateralism brings, and be more creative about increasing the representation of poor countries and poor people in global forum  the IMF, the World Bank, the UN Security Council, the Basel Committee on Banking Regulation, the G-8, and so on. We need, in short, creative thinking about the reality that we have a vibrant and potentially powerful instrument to increase wealth and welfare: the global economy. But to complement and support that economy we have an inadequate and fragile global polity. A major challenge of the 21st century will be to strengthen and reform the institutions, rules and customs by which nations and peoples manage the fundamentally political challenge of complementing the benefits of the global market with collective management of the problems, including persistent and unjust inequality that global markets alone will not resolve.

As Prime Minister Narendra Modi now talks about pushing further economic reforms, jets around the world to attract foreign investment by showcasing India as a manufacturing destination and talks of smart cities, he has to consider empirical data to ensure that third generation reforms do not increase inequality. Stung by the charge that his government is suit-boot ki sarkaar, the Prime Minister has already shifted focus to include the poor in his scheme of things and his many schemes like Jan Dhan, Direct Subsidy Transfer, Skill India, Insurance and Crop Insurance are all designed to ensure that the poor are not deprived of growth benefits. But as explained earlier, if the economy grows in a skewed manner, with some sectors getting a lions share of investment, inequalities are going to increase.