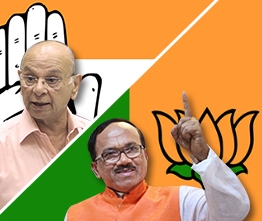 Goa: Parsekar is the Culprit

Goa: Parsekar is the Culprit

Editor-in-Chief of indiacommentary.com. Current Affairs analyst and political commentator. Writes for a number of publications. View all posts by this Author
In appointing Laxmikant Parsekar the chief minister of Goa when Manohar Parrikar was called for Central duty, the BJP adopted the old and discredited Congress way of elevating non-entities (and hence non-threatening entities) to plum posts. The idea behind these elevations is to control the state government with remote control from Delhi. Repeated such instances by Congress never let any kind of 'threatening' state leadership emerge and it has reduced the Congress itself to a non-entity. Now, the policy has handed the BJP a defeat in the recent assembly elections in the state. That Parsekar himself lost the elections from Mandrem shows how small a fry he was and how he ruined the several years of good governance by Parrikar.

Goa has returned a hung assembly with the Congress in pole position with 17 seats. The BJP has just 13. But Parrikar is upbeat that the party can form the government with the support Maharashtrawadi Gomantak Party (3), Goa Forward Party (3) and the 3 Independents. Apart from this, the NCP has one MLA in the house of 40. The Aam Aadmi Party, which was beating the drums loudly about the massive support it was getting, finished with zero seats and less than 6% vote share. So much for blowing ones own trumpet! The BJPs insistence on forming the government is based on the vote share. It has 32.5% to the Congress 28.3%. While this is acceptable it also shows that the party was either lazy in doing its arithmetic or adopted a faulty strategy. It seems that Goa got little attention from Amit Shah due to UP. Otherwise, master strategist that he is, he could have converted the vote share into seats to escape the blushes.

But nothing can hide the unpopularity of Parsekar. If the BJP forms the government (and it looks likely as the MGP or the GFP are unlikely to support the Congress, which can only form the government if the 3 Independents and the NCP support it, bringing their tally to 21) it must ensure stability and development. The tod-jod machinations will obviously give rise to allegations of money power being used. But if the BJP manages to bring MGP and GFP on board, one feels that the Independents will follow suit. Even the NCP can pitch in. Then, with a person like Parrikar the helm, the BJP can redeem itself in the state.

At the time of publishing this article, the latest news is that the BJP, led by Parrikar, has already staked its claim with support from 9 MLAs as above. The governor has accepted their claim and Parrikar is likely to take oath as CM on 14th March.