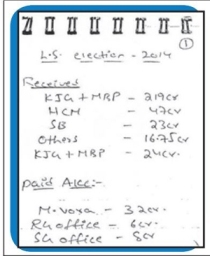 Govindaraj Diary versus the Sahara-Birla Diaries

Govindaraj Diary versus the Sahara-Birla Diaries

Editor-in-Chief of indiacommentary.com. Current Affairs analyst and political commentator. Writes for a number of publications. View all posts by this Author
Every political party in India has fundraisers right down to the ward level in urban areas and village level in rural areas. Although the methods of raising funds differ, most of these fundraisers are dubious characters and they often employ coercive and strong arm tactics to get people to pay. It can be small amounts through harmless methods such as donation boxes at rallies and meetings and coupons through door to door campaigns. Or it could be more coercive medium ticket amounts from hawkers, transport unions, workers unions and the like. Finally, it could be a goodly sum from those repairing their homes or businesses, real estate operators, business establishments and professionals. But one thing is sure. Since most of it is in unaccounted cash above the legal Rs 20000 from one source, it is often not entered in party books of accounts. The fund flows to one or two trusted hatchet men at the state level, who then route it to top level party functionaries at the national level. Normally, these hatchet men are given quotas  they are told to collect an x amount during a given period. The amount varies  it is more if the party is ruling and less if it is in the opposition. If it is a state level party, the flow of funds stops at that level. The protocol is well established, known to almost everyone and is followed by all parties.

It is in this context that the I-T raids on the Congress MLC Govindaraj about a year ago that yielded a diary where accounts of Rs 600 cr transferred to various Congress leaders at the high command before the 2014 Lok Sabha elections (including entries that said RGOffice, SGOffice and M Vora repeatedly) assumes importance. While the contents of the diary have been accessed and made public by a section of the media, one is sure that they will be rubbished by the Congress party. The party has already said that the diary is unverified as if all those named will verify that they did receive the amounts. The Congress faces a dilemma. If it now says that the diary cannot be taken as proof of money transfers, how will Rahul Gandhi, who claimed that the Sahara-Birla diaries were proof of illegal payments to Narendra Modi when he was chief minister of Gujarat, justify his stand? It seems that the epicentre of the earthquake Rahul Gandhi hinted (vis-à-vis the Sahara-Birla diaries) is now firmly at the Congress headquarters.

The BJP, on the other hand, can easily claim that while unnamed corporate sources who scribbled in the Sahara-Birla diaries could not be trusted, a party MLC like Govindaraj, who is known to be the fundraiser of the Congress in Karnataka will obviously keep records of payments he made to the party high command. The party can claim that while the earthquake did not materialize, a volcano has erupted in the Congress backyard. But the situation is very tricky and both camps will try to wriggle out of the dilemma. While the I-T department will pursue the case as it says it has other strong evidence of income from hidden sources against Govindaraj, it will be interesting to see what the Supreme Court thinks of the diary as evidence. It needs remembering that the apex court had refused to admit the Sahara-Birla diaries as any kind of proof for payments to politicians and bureaucrats. Will it take cognizance of the Govindaraj diaries if and when the case comes up before it?