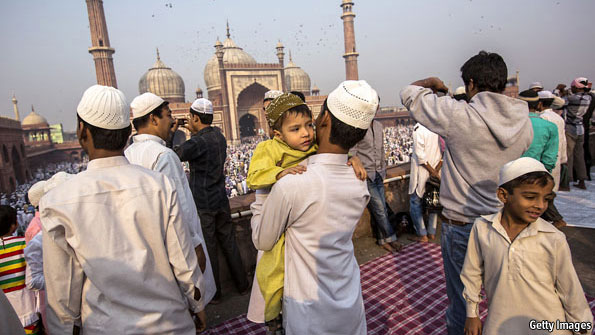 Growth in Muslim Population is Not Alarming

Growth in Muslim Population is Not Alarming

Editor-in-Chief of indiacommentary.com. Current Affairs analyst and political commentator. Writes for a number of publications. View all posts by this Author
The latest figures are out. People like Sakshi Maharaj need not be unduly worried. India is not being swamped by an army of Muslims and Hindu women have no need to give birth to four children to keep up the balance. In the decade 2001 to 2011, the Muslim population in India has grown by 24% and Muslims now form 14.2% of the population, up only 0.8 percent over the last decade (reported by The Times of India citing Census figures to be released shortly).

The figures show uneven growth of the Muslim population in different states. While Meghalaya, Odisha and Arunachal Pradesh showed almost negligible increases, Assam showed the highest increase of 3.3% along with Uttarakhand (2%), Kerala (1.9%), West Bengal (1.8%), Goa (1.6%) and J&K (1.3%). While this has raised old concerns about infiltration from Bangladesh in Assam and West Bengal, the high increase in Uttarakhand and Goa throws new light into migratory patterns of Muslims. J&K, Assam and West Bengal have the highest number of Muslims at 68.3%, 34.2% and 27% of the population respectively.

The Census figures once again prove that the bogey of Muslim population explosion being spread by hardcore Hindutva elements is not valid. The slightly higher rate of increase in Muslim population compared to the Hindu population is due to the poor socio-economic condition of the Muslims. It is a proven fact that people at the lowest end of economic spectrum reproduce more. The same is true of Dalits and other impoverished Hindu communities. Hence, the fact is not alarming. If one listens to the canards being spread by these elements, one will come to believe that every Muslim man marries four times and has more than 16 children. This, they say, will lead to a stage when Hindus will become a minority in India. Nothing could be further from truth.

Firstly, the sex ratio among Muslims in India is not much different from the national average. There are 936 females for every 1000 males in the Muslim community. The overall Indian average is 933 while for Hindus it is 931. So, if there are only 936 Muslim females for a 1000 males, where is the Muslim male getting his other 3 wives from if he marries four times? They could not be marrying women from other communities as there is a shortage there too and we have not heard reports of so many inter-religious marriages in India. Hence, the charge that most Muslims have four wives is false.

Then, if most Muslims had been rearing 16 or more children, their population would have exploded more than 3 times every year. (This has been calculated at 16 children each for reproductive age population). Does evidence suggest this to be true? The government should step in and stop the spreading of this misinformation by vested interests.

The only concern is the still unstopped infiltration from Bangladesh in Assam and West Bengal. The continued influx of Muslims from Bangladesh is skewing the population demographics of both Assam and West Bengal and creating disharmony in the region. Additionally, in West Bengal, it is giving rise to terror hubs that are aimed at destabilizing a neighbouring country. This has to be stopped and the illegal immigrants need to identified and deported. Narendra Modi had promised to tackle this problem. Now is the time to act on it.