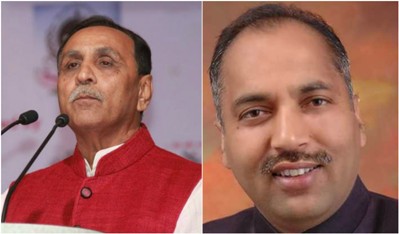 Editor-in-Chief of indiacommentary.com. Current Affairs analyst and political commentator. Writes for a number of publications. View all posts by this Author
The BJP has done well to retain Vijay Rupani in Gujarat and not make Prem Kumar Dhumal the chief minister of Himachal. Both decisions are in keeping with democratic norms. Rupani was the incumbent and despite facing huge anti-incumbency, hung in like a true soldier of the party. Obviously, he is not in command fully as the Gujarat government is being run by remote control. Further, he did not run a full five-year term. Hence, to blame him entirely for arousing anti-BJP sentiments in the state would be wrong. Amit Shah must have found him to be a pliable lieutenant in his home state and thought it prudent to retain him rather than upset the apple cart in the state already slipping out of his iron grip.

As for Dhumal, any chances he had vanished the moment he lost the election. There were murmurs that his prospects were sabotaged during seat selection when he was denied his usual seat. But a seasoned politician like Dhumal cannot complain after the elections. If he had reservations, he should have aired them before the elections. The choice of low key Jai Ram Thakur fit in perfectly as he is not aligned with anybody in state politics. People see his elevation as a masterstroke by Shanta Kumar who was smarting under his insult by Dhumal and wanted to take revenge. Dhumals loss provided him this opportunity of throwing his lot behind Thakur. But Thakur with his squeaky clean reputation and no-nonsense approach is what the BJP needs in the hill state.

Both Gujarat and Himachal will see a lot of new faces in the assembly as well as the cabinets. The next five years are going to both tough and exciting for the respective governments. There are many Central schemes that were not properly implemented in both the states  in Gujarat due to inertia in governance and in Himachal due to the Congress. With the elections out of the way, the governments of both states should now get down to the serious task of governance. The people of the states deserve that more than anything else.