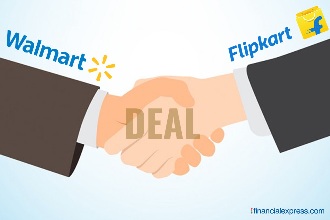 View all posts by this Author
Has Walmart invested wisely in Flipkart, given that it has paid an awesome $ 16bn for a 77% stake, making it the largest ecommerce deal in the world till now? Although Walmart CEO Doug McMillon said that "we understand it's not just an e-commerce business - Flipkart, Myntra, Jabong and the fashion business, PhonePe, EKart. This is a very special ecosystem, we get that and are excited about what this could become in the future," experts and shareholders back in the USA are not convinced. Walmarts stock tanked by 4% after the deal was announced. To set the record straight, Walmarts costliest acquisition till date was Jet.com in 2016 for which it had paid just $3.3bn. Experts do not buy the argument that Walmart will learn from Flipkarts special ecosystem. They say that the same excuse was given when Jet.com was acquired. They are also not convinced that Walmart needed this costly a presence in to counter arch rival Amazon.

But it has to be recognized that there are synergies between Walmart and Flipkart. Walmart has been playing on the fringes in India and has changed partners frequently. By now, it knows what it takes to do business here. It also knows that Flipkart has built a robust ecosystem from scratch and it is no ordinary platform. It also knows that if anyone can take on Amazon in India, it is Flipkart. Maybe the price was too high but with Amazon also making a bid, was there any option for Walmart? Flipkarts business now encompasses the general ecommerce platform along with niche segments in hugely popular and lucrative fashion selling, an online payment app after the acquisition of PhonePe and a logistics and delivery service in Ekart. After facing fund raising issues in the past year, Flipkart has also toned up its operations and now bleeds less. It may still take a few years for it to turn profitable  Walmart has admitted this when it informed shareholders that there will be a drop in earnings to the tune of 5%-11% in the next couple of years  but once it had turned profitable the price would have shot up considerably.

This deal  if Walmart can bring Flipkart out of the red - has the potential of letting the world know what exciting work is being done in India as far as the building up of the platform and making it robust is being concerned. While one is not entirely convinced by the deep-discount model of selling, it is sure that when just a few sellers remain after consolidation in the sector, 70%-80% discounts will not be seen again. Instead, now the focus will be on more and better products, better service, customer satisfaction and rewarding the sellers on the platforms. One can dispute the price that Walmart paid for Flipkart and call it excessive, but it is not a zero-sense deal, as one Amercian expert had called it. Of course it is a risky deal, but if Walmart lets Flipkart run the show as promised (McMillon has said there will be no bureaucracy running the show from USA) on a daily basis by just providing overall managerial and monetary support, one doesnt see the risk turning foul. It is not as if Walmart has invested in junk bonds. Flipkart is a genuine business  up and running. It just needs some time and a change in its deep-discounting model to turn profitable.