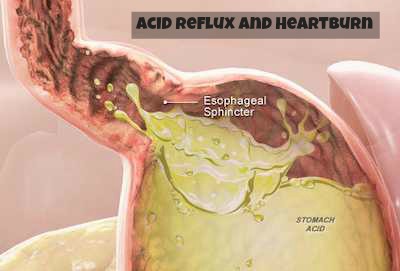 By our team of in-house writers. View all posts by this Author
Heartburn is distressing  and damaging too. It can turn a gastronomical delight into a night-long ordeal. How is it caused? The esophagus is separated from the stomach by a muscular ring called the lower esophageal sphincter (LES). The LES works like a gate, relaxing the muscle to allow passage of food to the stomach when you swallow. It later tightens to prevent food and acidic juices from the stomach from flowing back into the esophagus. But when the LES starts to malfunction (due to various reasons, of which we talk later in the article), it allows contents from the stomach to rise up to the esophagus and cause heartburn, sometimes accompanied by acidic juices that come into the mouth.

The LES sometimes relaxes out of turn or is weakened by various factors and doesnt close as tightly as it should, especially in people suffering from gastroesophageal reflux disease or GERD, commonly known as acid reflux. The muscles in the LES are controlled by various hormones and nerves. Hence, eating habits, drug reactions and conditions such as anxiety or anger can cause it to malfunction, leading one to experience acid reflux or if one is already suffering, then worsening the condition.

Foods such as coffee, tea and other caffeine-laced drinks loosen the LES and cause gastric acid production. Chocolates and mints relax the LES while fatty foods and fries cause heartburn. Some people get it from citrus fruits while others say they get it from onions and garlic. It is best to curtail and if possible, avoid the consumption of such food. Then, allowing a big gap between meals or skipping some meals to have a heavy meal later also increases the chances of acid reflux. Lying down immediately after a meal should always be avoided. Smoking is also a contributor as one swallows air while sucking on a cancer stick.

Drugs such as oral contraceptives or those containing progesterone are known culprits. Aspirin and other nonsteroidal anti-inflammatory drugs (NSAIDs) such as ibuprofen and naproxen can irritate the stomach lining. Drugs such as alendronate can irritate the esophagus. In addition, antidepressants, bronchodilators, tranquilizers, and calcium-channel blockers can contribute to reflux by relaxing the LES.

The burning sensation you feel with heartburn is caused by the stomach acid harming the lining of the esophagus. Repeated exposure of stomach acid to the lining of the esophagus can cause a condition known as esophagitis. Symptoms of esophagitis may include pain, difficulty swallowing, and more acid regurgitation. Heartburn can lead to gastroesophageal reflux disease (GERD), Barrett's Esophagus and, in a very small number of individuals, esophageal cancer.