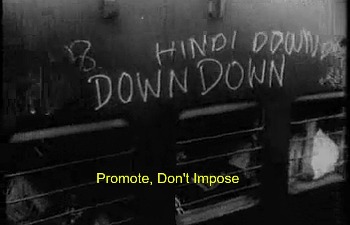 Hindi Should be Promoted, Not Imposed

Hindi Should be Promoted, Not Imposed

Editor-in-Chief of indiacommentary.com. Current Affairs analyst and political commentator. Writes for a number of publications. View all posts by this Author
In 2011, a parliamentary panel had recommended many measures that could be undertaken to make Hindi the preferred official language of governance. Some of these measures were sane and non-coercive. Others were akin to imposition. The NDA government has now decided to implement some of these measures in a bid to elevate the status of Hindi.

There can be no doubt that Hindi (along with various dialects that have close similarity to it) is the language spoken by a large majority of the population in the so-called cow belt of India. It is also equally true that area-wise, a larger portion of India speaks languages other than Hindi, although Hindi is gaining popularity in these areas solely because the youth is moving out of their states for education and jobs. But still, making children learn Hindi by force in schools (although it is better than making them learn Sanskrit) is coercion and is not the right way to popularize Hindi.

The worst part is that the politicians and officers mandated to enforce the Hindi rule send their children to elite English medium schools. In West Bengal, the comrades decreed that English will be taught in government schools from Class 5 onwards. Most of them sent their children to convent schools in Kolkata and some even elsewhere, in India or even abroad. English is the language which parents want their children to learn since it adds value to life when one seeks a job or becomes an entrepreneur, more so in the age when the world is becoming a smaller place.

The thought that a single language joins the nation is a fallacy as many small European nations have two or three official languages. Indias rich literature owes its bounty to writers who expressed themselves in their mother tongues. Imagine Tagore, or the great Tamil writers, writing in Hindi. Those who wish to learn Hindi willingly must be incentivized. Those who do not want to learn it should never be forced or penalized. If the government imposes Hindi, it will antagonize a large section of the population. Instead, it should create facilities for learning Hindi and provide the option in schools. After that market forces would determine who chooses to learn it.