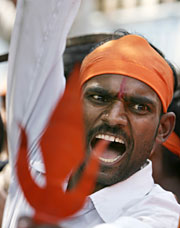 Editor-in-Chief of indiacommentary.com. Current Affairs analyst and political commentator. Writes for a number of publications. View all posts by this Author
If Narendra Modi harbours any hopes of fulfilling his promises to the electorate, he has to move quickly and put an end to the shenanigans of the various offshoots of Hindu extremist organizations. For, in the end, if he fails, it will for their excesses.

Apart from giving the party and the government a bad name, these unruly elements are providing the Opposition with an excuse of not cooperating with the government in Parliament. In the present scenario, the BJP needs all the help it can get to push through much needed legislation. Ordinances can be used only in emergencies.

Now, the time has come for him to make a list of all such Hindu organizations and call them for a meeting. He should drill in their heads in no uncertain terms that the government will not tolerate any kind of disruption. The government, if it is committed to the development of the country, needs to prevent these elements from disrupting the growth agenda.

But will Narendra Modi do this?

His record in Gujarat does not give much hope. He had ruled Gujarat and brought development there by letting the Hindutva elements disrupt the harmony of the state from time to time. He had thought it to be a minor digression in the scenario. But India is different from Gujarat.

First of all, the government does not have the required numbers in the Rajya Sabha. Any measure it takes for development needs to be passed by both houses of the parliament to become law. The Opposition will not cooperate with the government by citing the agenda of these Hindutva elements. The government will have to take recourse to ordinances frequently, which is not the way a democracy should be governed.

Hence, Modi has no alternative but to put a tight leash on these elements.

The nation cannot be made to suffer for what a tiny minority of Hindus think is right. If ghar wapsi or reconversion is an issue that is more important than bringing the economy back on track, there seems to be little hope for this great nation.

Till now, Narendra Modi has done little else than show his annoyance at these disruptions. But as a leader who has given the BJP its biggest electoral win, one thinks his writ should run on a broader scale. It is true that the large scale mobilization by RSS and people like Ramdev helped in bringing victory for the BJP, but the payback should not include anything that hampers growth.

The best way to bring an end to this would be for the Prime Minister to meet all these hotheads and tell them point blank that such tactics will not be tolerated. He should demand space from them to push his growth and development agenda. If they still pursue their anti-national agenda, the PM should let loose the full force of the state police against them.