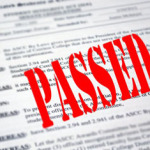 How Could Officials be so Unprofessional?

How Could Officials be so Unprofessional?

Editor-in-Chief of indiacommentary.com. Current Affairs analyst and political commentator. Writes for a number of publications. View all posts by this Author
Ignorant, inefficient, uncaring or just plain lazy, what would you call officials who goof up on an important bill like the Bangladesh land agreement bill?

Vice President Ansari was livid. How could such an important bill be passed by the Rajya Sabha with errors?

The problem was that the bill was numbered in one way, but when it was passed, it became another number, as not all bills introduced are passed to become Acts. The officials just changed the number in the short title and left the body untouched. This was a huge mistake.

A constitutional amendment bill must go through a fine toothcomb as it alters the holy book of our country. But such carefree attitude by officials, as well as the ministry of external affairs, has brought disrepute to the house as well as the law making process.

It is easy to say that it was a mistake and will not happen again. But with highly paid officers manning desks through which the bill must have passed, the episode shows complete disregard for professional efficiency.

One is sure the government will take measures to pinpoint the blame and mete out exemplary punishment to the ones who let the bill slip through with errors. Anything lesser would be a shame.