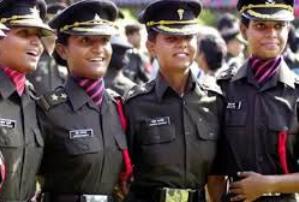 How Long Will The Government Allow The Armed Forces To Discriminate Against Women?

How Long Will The Government Allow The Armed Forces To Discriminate Against Women?

It is disconcerting that in this age and time, especially when we have a Prime Minister whose avowed policy is to prevent female foeticide and educate the girl child (Beti Bachao, Beti Padhao), the government has filed an affidavit in the Supreme Court that denigrates women, discriminates against them and finds them inferior to men in many ways. The apex court was hearing a case where it was demanded that other things being equal, the Indian armed forces must not discriminate against women when it came to appointments of commanding officers. No special concessions or relaxation of standards should be made for women that could compromise with the professionalism of the forces. The petitioners in the case have not made any such demand. The women just want to be treated as equals when it comes to promotion as commanding officers. Yet, instead of treating their case with the application of mind that it demands, the government has chosen to rebuff them in the most humiliating manner.

The government submitted that women officers were unsuitable for such a post as it claimed they had psychological limitations, had lower physical standards (women are not allowed in combat role yet), were held back by domestic obligations and were absent due to pregnancy. In a strange argument to support its stand, the government also submitted that the "composition of rank and file being male predominantly drawn from the rural background with prevailing societal norms, troops are not yet mentally schooled to accept women officers in command of units". Should not the government allow women in combat roles, reduce the male hegemony in rank and file recruitment and school the troops to accept women as commanding officers instead of making such biased arguments? In any case, these regressive arguments are always put forward by a patriarchal society to hold back the womenfolk.

Gender should not, and has not been, a discriminating factor in the armed forces. There are fighter pilots in the IAF. Women officers are being sent as part of the UN peacekeeping force in foreign countries. Women officers are already being accepted in the role of platoon and company commanders. Male jawans have not shown any disinclination to accept orders from a female officer. Where the job demands exacting physical standards, women are not allowed to apply. Further, a women officer will reach the level of the commanding officer at a time when she would not normally become pregnant and would have well-settled children to obviate too many domestic obligations. The idea of a woman in the armed forces having "psychological limitations" is laughable, especially if she has reached a stage where she can be considered for the post of a commanding officer.