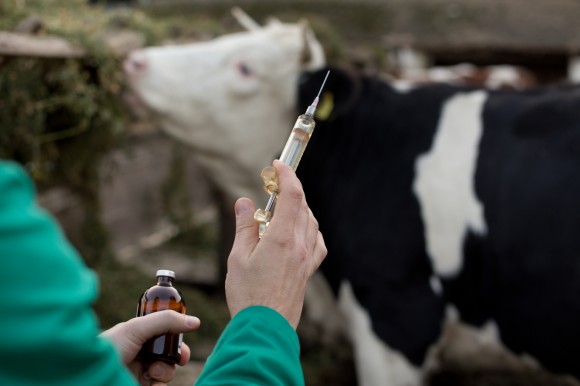 How To Stop Misuse Of Life-Saving Drug Oxytocin?

How To Stop Misuse Of Life-Saving Drug Oxytocin?

Editor-in-Chief of indiacommentary.com. Current Affairs analyst and political commentator. Writes for a number of publications. View all posts by this Author
It is common knowledge that cows and buffaloes are injected with oxytocin injections in dairies to make them yield more milk. There are unconfirmed reports that farmers are injecting fruits and vegetables with the drug to boost their size and appearance. Oxytocin is a life-saving drug that is used by doctors to save the lives of countless women who suffer heavy blood loss during child birth. It is also used to induce milk letdown in mothers who are unable to breastfeed their newborn.

Use of oxytocin injection in animals is banned under Section 12 of the Prevention of Cruelty to Animals Act, 1960. But the law is flouted with impunity. Its misuse in dairies and farming had led the government to first ban the import of the drug. Now, the government has ruled that the drug will be produced in India only by the public sector firm Karnataka Antibiotics and Pharmaceuticals Limited (KAPL) and has banned retail sale of the drug. KAPL will supply the drug directly to clinics and hospitals on requisition.

Obstetricians and gynaecologists, and their associations all over India, are up in arms against the implementation of this rule. They are of the opinion that reliance on a single producer, who may not be capable of regular and timely supplies, and lack of easy availability would put the lives of countless women at risk during childbirth. While the concern of doctors is genuine, given the universal ill-effects of oxytocin laced milk and other food products that Indians are consuming, it is worth giving the system a try.

It has to be admitted that drug administration and policing is extremely lax in India. With licenses to open pharmacies being given freely and no checks being kept on them regarding sales, prescription drugs and even narcotic drugs like sleeping pills and cough syrups are being freely sold to any and everyone. The Centre and the states have both failed miserably in regulating the sale of prescription drugs through pharmacies. Hence, obtaining oxytocin is childs play for dairy farmers.

Injecting cattle with oxytocin is very painful for them. They experience contraction of vagina and other physical changes when it is injected. When human beings drink milk laced with laboratory-made oxytocin, they experience hormonal imbalance. It can lead to reduced hearing and weak eyesight in children. Free availability of the drug needs to be restricted to avoid its misuse in dairies. Maybe the solution would lie in authorizing 15 to 20 pharmacies in metros and large cities and 10 in smaller towns to stock the drug. They must be asked to keep a register of sale and a copy of the prescriptions against which they sold the drug. They could be asked to upload this to a centrally-managed software which could then keep track and spot misuse. Misuse must be stopped but not at the cost of endangering lives of pregnant women.