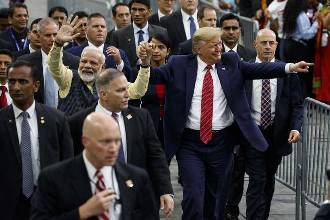 Prime Minister Modi has made it a habit to engage the Indian diaspora in all countries he officially visits. But the Howdy Modi event in Houston, USA assumed importance due to two reasons: one, it was to be the largest gathering of Indian-Americans to be addressed by a visiting Indian Prime Minister and two, it was to be attended by the President of the United States.

Modi had his compulsions: he needed to galvanize support for his government's policy on J&K and wanted to engage the politically-powerful and economically-strong Indian-Americans for the country's development. He was successful on both counts. The more than 50000-strong crowd cheered him on wildly when he spoke of terror spawned by a neighbouring country making it difficult for India to develop J&K.

Trump had his own compulsions. Indian-Americans have fast emerged as a powerful group that no presidential candidate can ignore, both for votes and campaign funding. Trump is facing a reelection in 2020 and by accepting Modi's invite for the event, he signaled to this group of Indians that he was with their country. (That he later chose to once again meddle in J&K, with Imran Khan by his side, by saying that he was ready to mediate if both countries agreed is another matter).

But the event achieved a lot. It showed the world that Narendra Modi's charisma was still intact with the diaspora. It showed that Donald Trump was still willing to show full support for the Indian position on J&K. It also showed that the Indians in America were solidly behind the government on its policies on J&K. The only discordant note was struck by four of the five Indian-origin Democrat members of the US Congress who chose to give the event a miss, highlighting their party's stand.