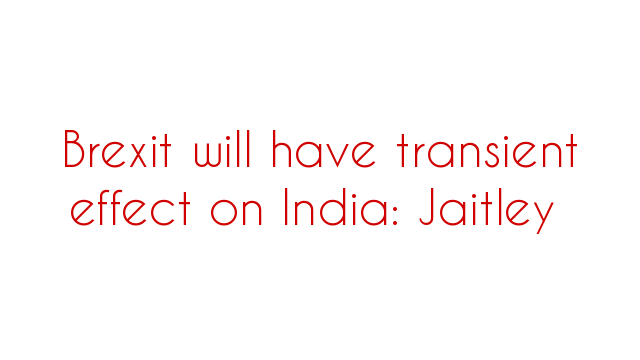 Brexit created shock waves in financial markets globally. India was no exception. As the pound crashed to a 31 year low it had its repercussions on the rupee also which depreciated by 89 paise against the US dollar to settle down to a 4 month low. In spite of the many fears voiced about the adverse affect of Brexit on the Indian economy, the country seems to have withstood the shock and absorbed it amazingly well. In hindsight, it seems FM Arun Jaitleys words in the accompanying image were prophetic.

Have you got your deal at Flipkart? Get it here

When, despite opinion polls indicating the contrary, 52% Britons voted for Brexit, PM David Cameron, who had opposed the idea, reigned. With uncertainty prevailing, all the currencies in the world, except those of USA and Japan, depreciated. This made some economists fear long term negative effects of this external shock on the Indian economy. Some of the concerns raised by economists were:

Uncertainty over future: The uncertainty which followed after 24th June was because the Brexit campaign did not map out the future course of action and relationship with EU and other countries. Because of these uncertainties and unanswered questions, global markets became volatile.
Increase of global risk aversion: Britain presently is the second highest source of FDI for India. After Brexit, this scenario may change. Investors may become more risk averse. The sudden increase in global risk aversion can impact inflow of Foreign Portfolio Investments (FPIs) to India.
New Equations: As Narendra Modi once mentioned in 2015, Britain is the Gateway to the EU for India. India may be forced to build relationships with other countries in EU to access the large European market.
Impact on GDP: Brexit will affect Indias GDP growth due to uncertain market conditions for its exports. It will also add significant pressure on the rupee.
Uncertainty in sectors investing largely in UK: Sectors like IT, automobile and telecom which do a lot of business with Europe would be adversely affected.

However, despite such concerns, India has done fairly well. In most of the instances, in contrast to what was expected, Brexit has not proved to be harmful. A research report by the SBI has stated that Britains exit from the EU, while creating a lot of uncertainty in the financial markets, might open up many opportunities for India. This is because of the following reasons:

Amongst the fear of currency depreciation it was believed that rupee would depreciate further and touch the 70 mark. However, even after more than month the rupee has remained more or less stable at Rs 67.1900 against dollar.
Britain will look for new trading partners after leaving the common EU market. Many proponents of the leave campaign suggested UK to look for partners in the commonwealth countries. India would be a natural choice for Britain, it being one of the fastest growing economies.
Amazing fashion deals await you at Flipkart. Shop here

UK business secretary Sajid David, in a meeting with Commerce and Industry minister Nirmala Sitharaman in New Delhi ,assured positive future relationship between India and Britain. This reduces the uncertainty regarding future.
The pound being lower, Indian students and tourists going to Britain will be benefitted. Also, with migration from mainland Europe drying up, Britain will be able to accommodate migration from other countries.
The debt market, which reacted negatively to Rexit, remained relatively calm on Brexit.
The MSCI India index, too, has done well latelyboasting a 15% return from its lows in February this year in local currency, outperforming other emerging markets in Asia.
The imports from UK will be getting cheaper on the event of Brexit, mainly rough uncut diamonds, spirits etc.

Considering all the reasons, it may be said that India has absorbed the economic shock of Brexit relatively well. The Brexit blues have now started to disappear as the resilient Indian economy, being managed by sensible monetary and fiscal policies, continues to take confident steps ahead regardless of external shocks.