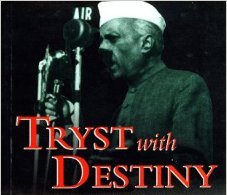 India Has to Change to Keep It's Tryst With Destiny

India Has to Change to Keep It's Tryst With Destiny

Editor-in-Chief of indiacommentary.com. Current Affairs analyst and political commentator. Writes for a number of publications. View all posts by this Author
68 years have gone by since we started our tryst with destiny. But a look at the present state of the nation clearly shows that this was definitely not the destiny foretold for us. The sone ki chidia has become a garbage bin. Along with allowing their brains to be filled with assorted garbage, Indians have turned the country into a huge open garbage vat. No Swaccha Bharat abhiyan is going to be successful unless the garbage in the brain is flushed out.

India could have leveraged its geographical location, richness in minerals, fertile land and human resources to emerge as a strong manufacturing and exporting nation ( after all, foreign invaders did that for over 200 years). Instead, government control and arbitrary decisions Ã¢â¬" leading to a licence-quota raj Ã¢â¬" lead to 44 years (before the opening of the economy in 1991) of unbridled corruption and crony capitalism when a certain portion of the politico-bureaucratic and business class cornered all benefits for itself. Competition was crushed. Mediocre products, made at a huge cost, were sold at even greater profit by corporations that were favoured by corrupt politicians and bureaucrats. When 1991 reforms happened, the government of the day made the mistake of not making decision making transparent. Crony capitalists had a field day and multi-crore scams ensued.

In the interim, politicians and political parties kept dividing Indians on the basis or caste, community, language and region. In the process, a pan-Indian identity went for a toss and we increasingly became Hindus, Muslims, Sikhs, Jains or SC, ST, OBC or even Bengalis, Punjabis and Tamilians. Spurred by access to easy money from government welfare schemes, politicians carved out small empires for themselves according to whatever way they could manage to divide the people. They and their hangers-on prospered. Even lanky Leftists started sporting pot-bellies, while the people remained unfed and unemployed. Every politician pointed fingers at others without finding a solution to the problem. India remained, and remains, submerged in a cesspool of mediocrity brought about by its ruling classes. Individual Indians excelled and shined, but as a country India was left way behind in the community of nations.

Now, as we stand on the threshold of an economic revolution, petty political rivalries continue to spread nails on the pathway, much in the manner of the tyre-repairing shop that does it on the highway to get customers. If India does not undertake electoral reforms, bring about transformation in decision making by making it transparent, does not introduce a mechanism to weed out and punish corruption, does not reward innovation and enterprise and does not cut down on red tape by enacting modern and efficient laws, we will not be able to keep our tryst with destiny for a long time to come.